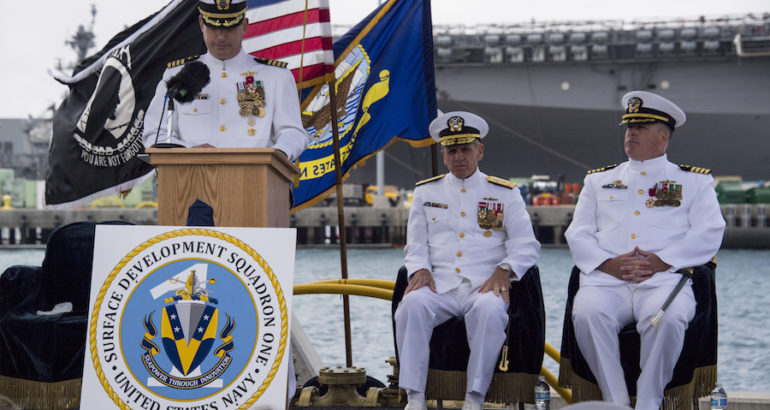 SURFDEVRON ONE will integrate unmanned surface vessels (USV) and support fleet experimentation to accelerate delivery of new warfighting concepts and capabilities to the fleet.

Brown, who provided remarks during the ceremony, told the attendees they were witnesses to the future in Surface Warfare.

“By standing up a command dedicated to developing warfighting capabilities and experimentation, we will ensure the U.S. Surface Navy remains the premiere Surface Navy in the world,” said Brown.

SURFDEVRON’s primary functions will be to:

To establish the new command, CNSP re-designated Zumwalt Squadron ONE (ZRON ONE) to SURFDEVRON ONE to accelerate new warfighting capabilities to the surface force and lead Fleet integration of unmanned surface vessels. Commanders, U.S. Fleet Forces Command and U.S. Pacific Fleet, approved the SURDEVRON ONE plan, and Chief of Naval Operations endorsed it earlier this year.

“ZRON ONE embodied Adm. Zumwalt’s legacy of warfighting innovation by leading fleet integration of the revolutionary ship class that bears his name,” said Carroll. “Establishing this new squadron – with its focus on experimentation and future warfighting technology – fulfills and extends ZRON’s purpose to the rest of the Surface Navy. Although the name has changed, I’m proud to note that ADM Zumwalt’s innovative legacy will persist.”

“I want to recognize and thank Capt. Scott Carroll for his leadership and hard work while Commander of the ZRON,” said Brown. “His leadership was crucial to the introduction of the Navy’s newest and most technologically advanced ship class. He ensured the Zumwalt class was properly manned, the Sailors specifically trained to operate the advanced warfighting systems, and the required material readiness was in place to conduct sustained combat operations at sea.”

“It’s an honor and a privilege to lead the SURFDEVRON ONE team as we work to execute the Navy’s and surface warfare community’s vision to build an organization focused on fleet innovation and experimentation,” said Adams. “We look forward to the challenge and to working with the broader community of interest – both inside and outside of the Navy – as we collaborate to realize SURFDEVRON ONE’s full potential.”

“Hank, throughout your career you have taken on challenges with professionalism, energy, and enthusiasm,” Brown added. “We charge commanders to be ready to ‘accept the extraordinary responsibility of command with full regard,’ and this will be extraordinary.”

The stand-up of SURFDEVRON ONE will be executed in phases over the next several years until it reaches full capacity and capability.

SURFDEVRON ONE draws on the urgency within the National Defense Strategy (NDS), which acknowledges, “We cannot expect success fighting tomorrow’s conflicts with yesterday’s weapons or equipment, and exercising a strategy proven in other Navy warfighting communities.”  SURFDEVRON ONE also aligns with the Secretary of the Navy’s vision of an integrated Naval Force that provides maritime dominance for the Nation with a renewed sense of urgency and speed throughout the entire organization.

The squadron headquarters will be located onboard Naval Base San Diego but will operate throughout various areas of operation.