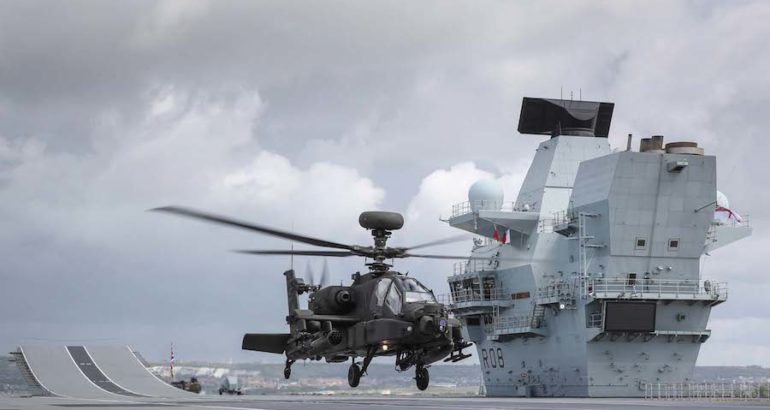 A Boeing AH-64 Apache from the British Army Air Corps has landed onboard HMS Queen Elizabeth for the first time (Credit: Royal Navy)

Having already hosted RN Merlin and Wildcats and RAF Chinooks to help write the ship’s ‘operations manual’, the team on the carrier are now working with the gunship to practise some of the routines needed to support the Army Air Corps (AAC) helicopters on operations.

Apache operated sporadically from the decks of HMS Illustrious and HMS Ocean – including conducting air strikes at targets in Libya during the civil war of 2011.

It had not, however, touched down on the UK new class of carriers until yesterday, flying in from Wattisham in Suffolk and safely guided on to the sprawling flight deck by Leading Aircraft Handler Sion Rose.

The ‘Platform Ship Integration Testing’ is being led by 667 (Development & Trials) Squadron AAC with the assistance of ground crew and engineers from 656 Sqn AAC as well as the ship’s company.

During a busy three days, they are performing various tasks from the basics of stowing the gunship securely to carrying out maintenance, refuelling the helicopter, the safe handling and loading of weapons and ammunition. That will help pave the way for 656 Squadron embarking on the Portsmouth-based warship later this year.

The AAC currently operates a fleet of 66 WestlandAgusta Apache AH1 combat helicopters. Under a US$2.3Bn FMS contract approved in 2016, the AAC will receive 50 AH-64E helicopters to the same standard being delivered to the US Army. The first UK helicopters are due off the US production line in early 2020 and will begin entering service with the British Army in 2022.