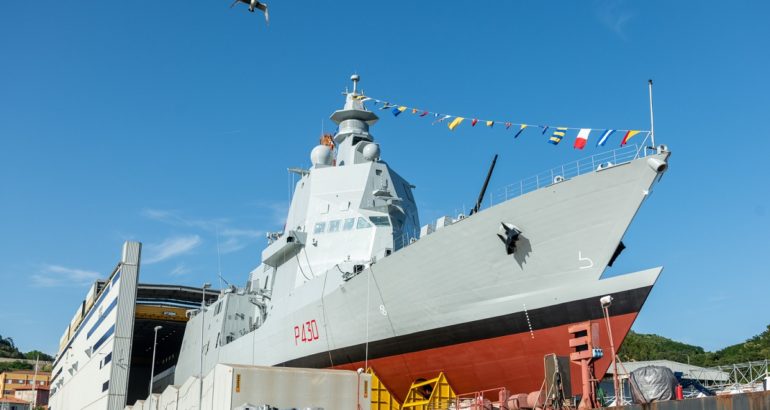 Godmother of the ceremony was Mrs. Irene Imperiali, nephew of the Admiral Paolo Thaon di Revel.

The ceremony was attended among others by the Chief of Staff of the Italian Navy, Admiral Valter Girardelli, by Fincantieri’s Chairman Giampiero Massolo and CEO Giuseppe Bono. The PPA, first of seven units, will be delivered in 2021 and it is part of the renewal plan of the operational lines of the Italian Navy vessels, approved by the Government and Parliament and started in May 2015 (“Naval Law”).

The multipurpose offshore patrol vessel is a highly flexible ship with the capacity to serve multiple functions, ranging from patrol with sea rescue capacity to Civil Protection operations and, in its most highly equipped version, first line fighting vessel. There will be indeed different configurations of combat system: starting from a “soft” version for the patrol task, integrated for self-defence ability, to a “full” one, equipped for a complete defence ability. The vessel is also capable of operating high-speed vessels such as RHIB (Rigid Hull Inflatable Boat) up to 11 meters long through lateral cranes or a hauling ramp located at the far stern.

• 132.5 meters long
• Speed more than 31 knots according to vessel configuration and operational conditions
• 171 persons of the crew
• Equipped with a combined diesel, a gas turbine plant (CODAG) and an electric propulsion system
• Capacity to supply drinking water to land
• Capacity to provide electricity to land with 2000 kw of power
• 2 modular zones at the stern and at the center of the ship that allow the embarking of various types of containerized operating/logistic/residential/healthcare modules (in particular, the stern area may receive and handle within a covered area up to 5 modules in ISO 20” containers, while the central zone may receive and handle up to 8 ISO 20” containers)
The PPAs will be built at the Integrated Shipyard of Riva Trigoso and Muggiano, with delivery expected, for the first vessel of the class, in 2021, while the following deliveries will take place in 2022, 2023, 2024 (two units), 2025 and 2026.