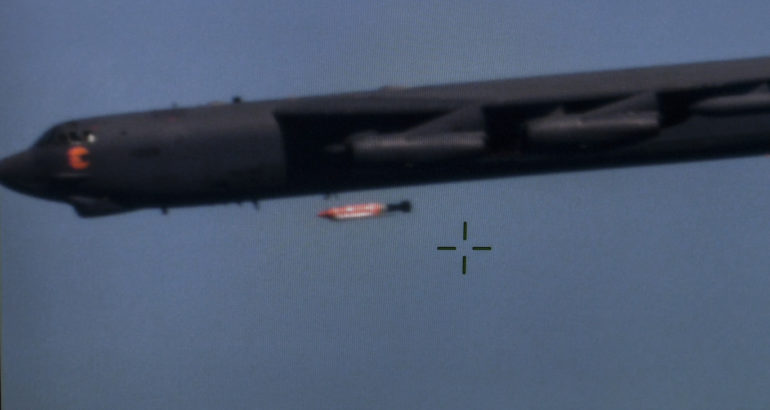 PACIFIC OCEAN (May 30, 2019) A B-52 Stratofortress, assigned to the 49th Test and Evaluation Squadron from Barksdale Air Force Base, La., conducts an operational demonstration of the Quickstrike-ER (QS-ER) Naval mine project in the Pacific Ocean, May 30, 219. The QS-ER project was initiated by U.S. Indo-Pacific Command as part of ongoing efforts to modernize and enhance military readiness throughout the joint forces in the Indo-Pacific region. (U.S. Navy photo by Mass Communications Specialist 1st Class Holly L. Herline)

U.S. Indo-Pacific Command Tests Quickstrike-ER Naval Mine from B-52 Bomber

A B-52 Stratofortress, assigned to the 49th Test and Evaluation Squadron from Barksdale Air Force Base, La., conducts an operational demonstration of the Quickstrike-ER (QS-ER) Naval mine project in the Pacific Ocean.

U.S. Indo-Pacific Command (USINDOPACOM) conducted an operational demonstration of the Quickstrike-ER (QS-ER) Naval mine project at the Pacific Missile Range Facility (PMRF) May 30.

This is the final and largest demonstration of the project and is part of a two-year joint effort to develop, test, and operationally demonstrate QS-ER. USINDOPACOM initiated the project as part of ongoing efforts to modernize and enhance military readiness throughout the joint forces in the Indo-Pacific region.

“Current mine technology, while effective, has been largely unchanged since World War II. These innovations and capabilities in the QS-ER project will allow our forces to generate more effective minefields from longer ranges and more rapidly than ever before.”

The QS64-ER combines Joint Direct Attack Munitions (JDAM) technology and an additional wing kit and battery section with existing mine components. This allows it to be delivered long range and high altitude, which significantly reduces risk to the aircraft.

“This aerial maritime mine is compatible, interoperable, and can be employed by virtually any JDAM enabled aircraft, including foreign partners,” said Ka‘iliwai. “These capabilities will serve as a significant deterrent in peacetime and an effective operational and strategic tool in wartime.”

A B-52 bomber from the 49th Test Squadron out of Barksdale, La. carried out the exercise and released four inert QS64-ER 2000lb mine shapes on a remote shallow water location of the PMRF.

“These innovations, combined with the global reach of America’s bomber fleet, enhance a joint force ready to fight and win. The USAF is actively pursuing ways and means, along with our Joint partners, to develop and produce new technologies, like the QS-ER and the effort to modernize the B-52H, in a much more rapid capacity so that we bring the future faster.” 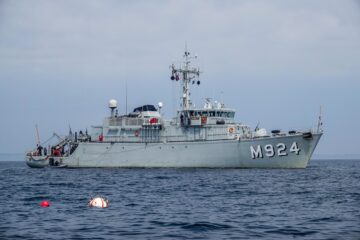 Juho Lee 11 Jun 2021
Sensorpia produces many of the vital sensor technologies that are utilized by major South Korean companies, such as LIG Nex1, and the Republic of Korea Navy (ROKN). Naval News interviewed Dr Derac Son, the CEO, at MADEX 2021.