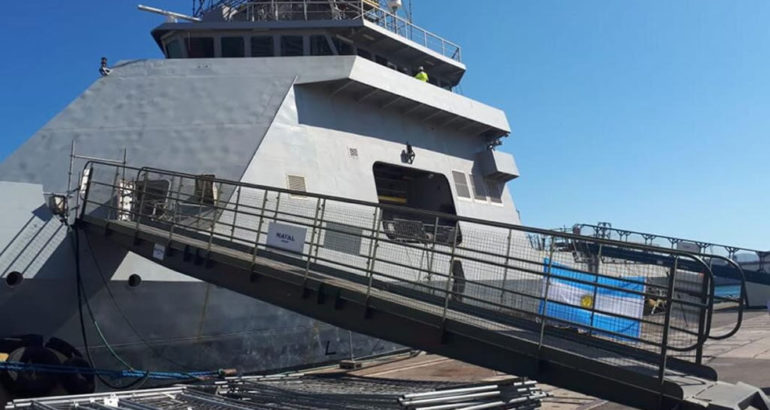 The head of the Argentine Navy (Armada de la República Argentina) visited Toulon Naval Base in Southern France to see the progress on the L'Adroit OPV and the overall program.

The Chief of the General Staff of the Argentine Navy, Admiral José Luis Villán, and the Head of the Naval Mission in Europe, Captain Marcelo Ángel Valverde, visited Toulon Naval Base in early July to see the progress of the upgrade and overhaul of the L’Adroit Offshore Patrol Vessel (OPV).

The were also briefed on the construction of the other three new-built OPVs that are set to be commissioned, after the signing of the contract between the Argentine Republic and Naval Group.

During the visit, Naval Group representatives explained the progress of the work being carried on the OPV L’Adroit and on the second and third units, which construction is underway at the French shipyards of Piriou, in the town of Concarneau and Kership Lanester in the city of Lorient, respectively. A total of four ships of the same class planned.

The visit ended with a tour aboard the L’Adroit, during which the naval delegation supervised the modernization and adaptation of the ship.

The Argentine Navy OPV program came into effect on February 14th 2019 and is being carried out by Kership, a joint company formed by Piriou and Naval Group.

Regarding the L’Adroit OPV, produced by Naval Group on its own funds and used by the French Navy from 2011 to 2018, the vessel is set for delivery in mid-December. According to our information, the main overhaul work consists in the replacement of the shafts and propulsion systems.