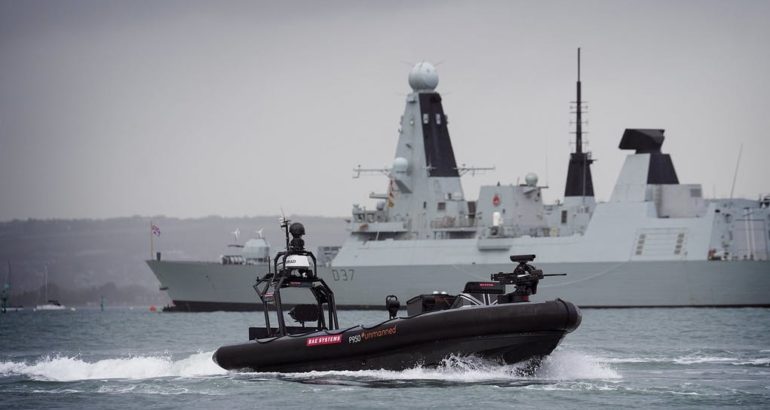 BAE Systems' The vessel can operate for up to 10 days at ‘patrol speed’ or 300 nautical miles in pursuit mode, reaching speeds of up to 45 knot.

The autonomous Pacific 950 Rigid Inflatable Boat (RIB) demonstrator has been used to develop and prove innovative technologies which have the potential to make naval missions faster, easier and safer, taking the relationship between human and machine to new territories.

Developed alongside industry experts from L3Harris and MSI Defence Systems, the P950 is equipped with automated navigational decision-making technologies, freeing up operators to focus on mission critical information from afar. To enhance the capability of existing warships, the technology has been designed to be retrofitted to existing RIBs, such as BAE Systems’ Pacific 24, which is currently in service with the Royal Navy across its surface fleet.

The vessel can operate for up to 10 days at ‘patrol speed’ or 300 nautical miles in pursuit mode, reaching speeds of up to 45 knots, whilst either being remote controlled or on a semi-autonomous mission. Trials conducted by BAE Systems have shown how the technology provides a unique ability to undertake complex, multi-phase missions and support advanced dynamic tasking, whilst providing enhanced situational awareness to support faster and more effective decision-making by naval operators.

It has potential applications across a range of missions, including anti-piracy operations, border control, persistent intelligence gathering, maritime security and force protection. The use of autonomous vessels in high-risk areas would allow operations to be conducted without endangering sailors or Marines.

The boat has pre-programmed intelligent behaviours to position itself appropriately in relation to a potential threat. Its weapons system, developed by MSI Defence Systems with BAE Systems, remains firmly under a human operator’s control, ensuring that whilst the vessel can operate and navigate autonomously, there will always be a highly-trained operator in the loop, making the final decision on engagement and targeting.

The MSI-DS SEAHAWK Multi Weapon Station (MWS) A1 is specifically designed to be the most compact, lightweight, remote controlled naval gun system available. It features a universal soft mount system which can be fitted with 7.62mm or 12.7mm machine guns from a variety of manufacturers. An alternative option is to fit a 40mm grenade launcher in the same soft mount system.