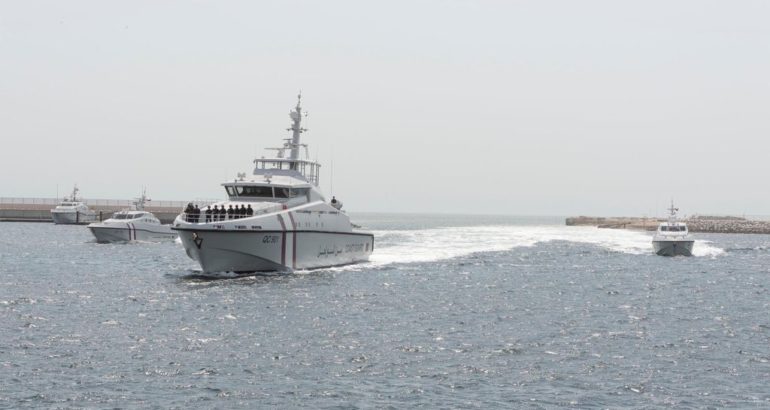 Qatar inaugurated a large naval base and new additions to its fleet during a ceremony on Sunday 14 July.

The ceremony was held in presence of Prime Minister Abdullah bin Nasser bin Khalifa Al-Thani and commander of US Naval Forces in the Middle East Vice Admiral Jim Malloy.

The new base is located in Al-Daayen, about 30 kilometres North of Doha on Qatar’s eastern coast. Qatar new large gas terminal (and gas fields) is located in the Northern part of Qatar, and one of the main mission of the reinforced Coast Guard will be to secure these important resources.

Built on a total area of 639,800 square meters, Al Daayen Naval Base is located in the middle of the country’s eastern coast, in order to facilitate the securing of all territorial waters of the State and border posts.

The base includes all the advanced requirements for marine security, which will contribute to securing the maritime borders of the State and tightening the security control and protection of all its coasts by conducting maritime patrols.

The naval base accommodates a sophisticated seaport with a depth of 6 meters besides other sports, training and medical facilities, civil defence, manufacturing and maintenance workshops, operating rooms, officers’ accommodation and other facilities.

During Al-Daayen naval base inauguration ceremony, HE the Prime Minister and Minister of the Interior inaugurated a number of new patrol boats belonging to the Coast Guard and Borders Security. HE also witnessed a performance by the Department’s search and rescue team.

During DIMDEX 2018, the Qatari Coast Guard has ordered nine additional vessels bringing to 26 the number of ARES Shipyard vessels expected to be operated by the service by 2020. The new ordered consisted in 3x Ares 150 Hercules offshore patrol vessels and 6x Ares 80 SATs for special forces.