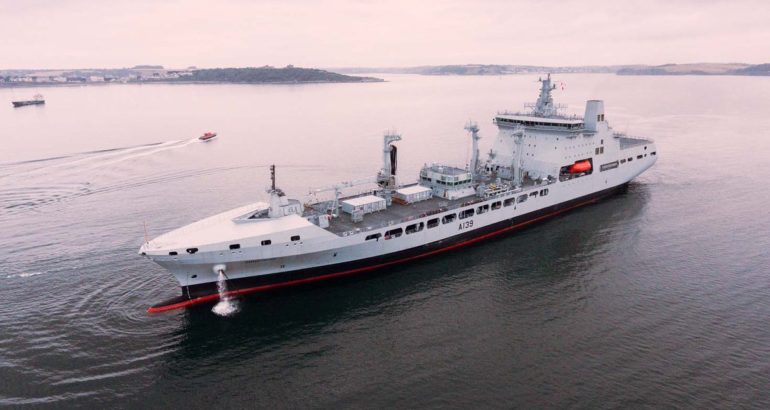 RFA Tideforce was commissioned with the Royal Fleet Auxiliary on July 30, joining her sister ships Tidespring, Tiderace and Tidesurge in providing fuel at sea to Royal Navy, NATO and allied warships.

The Tide-class tanker (formerly the Military Afloat Reach and Sustainability (MARS) project) is a class of four fast fleet tankers that entered service with the British Royal Fleet Auxiliary from 2017. The 37,000 tons ships provide fuel, food, fresh water, ammunition and other supplies to Royal Navy vessels around the world.

Each of the four Tides can deliver more than 1,500 cubic metres of fuel every hour – nearly 400,000 gallons, or 1½ million litres… enough to fill the tanks of more than 27,000 family runarounds.

As well as their supply duties in support of the Royal Navy, the vessels can also undertake a wide range of independent operations, such as patrols policing shipping lanes and humanitarian relief.

“RFA Tideforce’s arrival into the Royal Fleet Auxiliary represents the culmination of a major project to modernise and update the UK’s Fleet Replenishment Tankers. I am indebted to all from the UK and abroad who have contributed to the success of the project and the ship’s company who have provided the final piece of the jigsaw by bringing the ship alive through delivery, trials and training.”