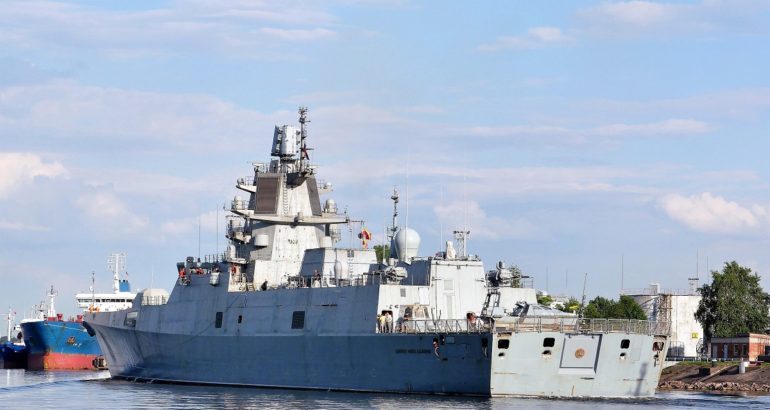 An ECA Group Inspector Mk 2 USV from the Diamand mine warfare system on the helipad of the Russian Navy frigate Admiral Kasatonov. Baltiysk, 06/20/2019 (c) RussianArms / forums.airbase.ru

According to local media, the Russian Navy started to experiment the use of UUVs and USVs from its Project 22350 Admiral Gorshkov-class frigate. UAVs are set to be tested from Russia's latest generation of frigates as well.

The report was first published by Russian newspaper “Izvestia” but was then backed by ship spotters pictures. The Russian Navy is using the Admiral Kasatonov frigate (second ship of the class) to test the Diamond system. It is a mine warfare system consisting of an unmanned surface vessel (USV) and unmanned underwater vehicles (UUV).

In addition, the Orlan-10, an unmanned air vehicle (UAV) will soon be tested on the frigates, which will be used for remotely inspecting ships and delivering strikes, sources in the Ministry of Defense told Izvestia.

The Russian Navy is following the trend that consists of using manned surface vessels (sometimes fully-fledged surface combatants) for the launch, operation and recovery of unmanned maritime systems, essentially using the manned vessel as a mother ship. As Naval News has reported, the navies of Singapore (MRCV) and Japan (30FFM) are working on such projects. So are the navies of Belgium and the Netherlands in the field of mine warfare. The US Navy’s Littoral Combat Ships were designed with modularity in mind from the beginning with the development of unmanned packages as well. The notable difference with the Russian Navy experimentation is that the Project 22350 frigates were not designed specifically for this purpose.

The Admiral Kasatonov has not been formally delivered to the Russian Navy as it is still conducting builder trials. The frigates of this class are designed to operate in blue water, Admiral Valentin Selivanov, the former chief of the General Staff of the Russian Navy, explained to Izvestia: “First of all, they can effectively solve a number of combat tasks without support forces. The ships are armed with long-range missiles that need target designation – for this there are satellites, airplanes and reconnaissance ships. But in war, help may not come – in this case, drones will conduct reconnaissance and indicate where targets are located. Soon, Admiral Kasatonov will receive a number of new robotic systems that will seriously increase the combat effectiveness of the ship. It is already known that the frigates of the new series are planned to be equipped with the Orlan-10 UAV and strike boats.”

The Orlan-10 UAV will allow the frigate to act as a scout and even an electronic warfare (EW) system. It is a medium class drone with a range of up to 120 km, capable of transmitting video, with an endurance of up to 14 hours and a maximum altitude of up to 5000 meters. Usually, the Orlans are used in groups of two or three UAVs. One of the vehicles conducts reconnaissance at a distance of 1–1.5 km from the ground, the second carries the EW, being slightly higher, and the third transmits video to the base from a height of 4.5–5 km.

Regarding the Diamond system, the USV can operate at a distance of up to 10 km from the ship. The associated UUV can detect and dispose of mines at a depth of 10 m to 100 m. The USV themselves using the onboard hydroacoustic station, magnetometers that detect metal under water, and other onboard equipment can detecet minds mines too.

The Diamond systems (Including 4 Inspector Mk2 USVs) were originally procured from French company ECA Group for the new MCM vessels of the Russian Navy by the Russian company Prominvest (part of the State Corporation Rostec) in January 2014 . Subsequently, the contract was reduced to three Inspector Mk 2 USV, which were delivered to Russia from autumn 2015 to summer 2017. K-Ster expendable mine disposal vehicles were not delivered. Two sets of the Diamond system with Inspector Mk 2 USVs are installed on the first two minesweepers of the project 12700 Alexander Obukhov and Ivan Antonov, commissioned respectively in December 2016 and January 2019. The third system is now apparently being tested from the Admiral Kasatonov frigate.

The decision to equip Project 22350 frigates with the Diamond system has not yet been made, according to Izvestia citing sources in the Ministry of Defense. However, as noted by military expert Dmitry Boltenkov, large and expensive ships, which include frigates, must be reliably protected.