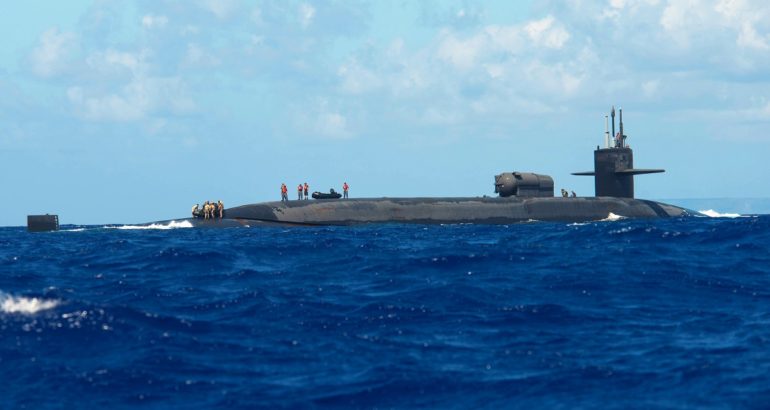 Maintenance availabilities are a key element in maintaining an agile and modern fleet that is able to remain on station for long periods, which is especially important for America’s guided missile submarines.

The project team is implementing several process improvement initiatives aimed at reducing time to perform steering and diving grooming, hull valve repairs and structural inspections and repairs. The project team and engineering have analyzed each of the work strings to find opportunities to streamline the process.

Michigan is one of four Ohio-class submarines converted from a ballistic missile submarine to a cruise missile submarine. The boat’s homeport is Naval Base Kitsap – Bangor. Built by Electric Boat, she was commissioned (as a Ohio-class SSBN) on 11 September 1982. Its conversion into a SSGN was completed in June 2007.

Combined, the four SSGNs represent more than half of the Submarine Force’s vertical launch payload capacity with each SSGN capable of carrying up to 154 Tomahawk land-attack cruise missiles. The missiles are loaded in seven-shot Multiple-All-Up-Round Canisters (MACs) in up to 22 missile tubes. These missile tubes can also accommodate additional stowage canisters for SOF equipment, food, and other consumables to extend the submarines’ ability to remain forward deployed in support of combatant commanders’ tasking. The missile tubes are also able to accommodate future payloads such as new types of missiles, unmanned aerial vehicles, and unmanned undersea vehicles.

The SSGNs have the capacity to host up to 66 SOF personnel at a time. Additional berthing was installed in the missile compartment to accommodate the added personnel, and other measures have been taken to extend the amount of time that the SOF forces can spend deployed aboard the SSGNs. The two forward most missile tubes were permanently converted to lock-out chambers that allow clandestine insertion and retrieval of SOF personnel. Each lock-out chamber can also accommodate a Dry Deck Shelter (DDS), enhancing the SSGNs’ SOF capabilities.