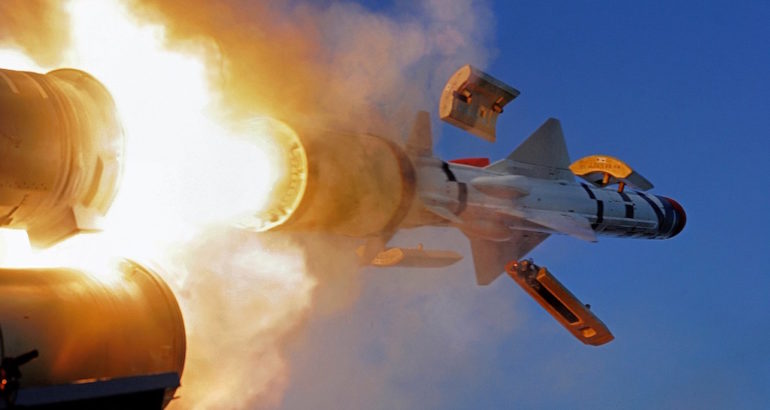 Exocet MM-40 Block 3 firing. FC/ASW is due to replace the Exocet missile in French forces. ©MBDA

Will the French-British FC/ASW Missile Program Survive a Hard Brexit ?

In March, MBDA announced the end of the Key Review on the Future Cruise/Anti-Ship Weapon program. In June, the company unveiled scale models of different multipurpose missiles that could be linked to the FC/ASW.

Europe’s leading missile producer, however, will be facing challenges in the coming months and years, casting shadows on the future of the entire program.

Valued at €100 million, the Concept Phase of the program was initiated in 2017 and is due to end in 2020. By then, MBDA should be able to propose to French and British forces a design (or several designs) based on mature systems and technologies.

Earlier this year, MBDA revealed that the Key Review of the program was successfully completed in cooperation with the French Armament General Directorate (DGA) and British DE&S (Defence Equipment and Support) defence procurement agencies.

This Key Review which ended in March 2019 helped in the selection of several general designs that could be used as a technical basis for the FC/ASW missile. Depending on the funding of the program and the requirements outlined by French and British armed forces, different options may then be developed into the operational FC/ASW.

In 2020, a contract is due to be signed by the two countries for the second phase of the program. During four more years, MBDA is set to complete risk reduction tasks and to finalise the overall design of the FC/ASW. Contract for the missile development is expected for 2024, with first deliveries to take place in 2028-2030.

Bad timing for the FC/ASW ?

Since the end of the bilateral cooperation on the Anglo-French unmanned combat aerial vehicle (UCAV) and Future Combat Air System (FCAS), FC/ASW appears as the most structuring project of the UK-France Defence Cooperation Treaty of Lancaster House. Developing a joint missile system for naval and deep strike land attack will indeed strengthen the operational cooperation between Europe’s top two military powers.

But timing concerns and conceptual problems are yet to be anticipated. Let alone the traditional delays in any multinational weapon program (as is currently the case with the FASGW(H) / ANL / Sea Venom program).

The timing of the entire FC/ASW program is clearly seen as the main problem for the moment. The FC/ASW early operational capability is not expected until 2030. But the Royal Navy’s Harpoon will be phased out at the end of 2023. A stop-gap procurement is then inevitable.

On March 8, 2019, the UK MoD Weapons, Torpedoes, Tomahawk and Harpoon (TTH) Project Team issued a Prior Information Notice to provide the Royal Navy information regarding the replacement of its Harpoon in 2023 or 2024. Several bidders are willing to provide a Surface Ship Guided Weapon (SSGW).

Another batch of Harpoon or even the acquisition of small number of Exocet Block 3C or Saab’s RBS15 could be seen as an interim solution while waiting for the FC/ASW. But the selection of a more modern design such as the Konsberg NSM or Lockheed Martin LRASM could jeopardize the entire FC/ASW program. The AGM-158C LRASM sharing the same airframe as the AGM-158B JASSM-ER, such a solution could theoretically fill all the British requirements of the FC/ASW program.

Timing problems aside, from a conceptual point of view, there are two different types of concern on the FC/ASW program itself.

Firstly, French and British do not exactly share the same feedbacks from their current missiles systems regarding survivability. For the Royal Navy and Royal Air Force, replacement of the Storm Shadow and Harpoon could be done by a very stealthy missile, implying a subsonic speed in order to reduce IR signature and extend range. French forces, on the other hand, already possess considerable expertise in the use of supersonic missiles for nuclear strikes. The high survivability of the supersonic ASMP-A nuclear missile could then be applied to similar high speed conventional weapons. Historically, the idea of replacing the Exocet by a supersonic anti-ship missile was first raised in the 1980ies with the ANS project (anti navire supersonique, a French-German project) followed by the ANF project (anti navire futur) in the late 1990ies.

Secondly, land strike and anti-ship missions require intrinsically different capabilities, depending on the threat they have to deal with. For land strike, modern cruise missiles are often long range subsonic vehicles, with a low observable airframe, a heavy payload and terrain-following capability. On the other hand, countering modern A2/AD naval systems will require supersonic or hypersonic maneuverable missiles, with a very different payload.

The complexity of the design phase of the program explains why the current Concept Phase includes a Key Review that already reduced the possible designs from seven to an unspecified lower number of configurations.

Last June, during the Paris Air Show, MBDA unveiled two different concepts of cruise missiles. One of them featured a very stealth shape with retractable wings. This concept of subsonic missile carries a large bursting charge and is able to loiter for a long time waiting for a target. The other concept was a supersonic cruise missile able to strike land and sea target, but also enemy air defenses and large aircraft such as tankers or AWACS. While those designs were not labeled as FC/ASW at Paris Air Show, Naval News was told that they feature several technical specifications of the designs currently under study for the joint French-British program.

What choices for the Future Cruise and Anti-Ship Weapon(s) ?

For the moment, three solutions could theatrically come to light and are being studied by MBDA, maybe based on the concepts unveiled at Le Bourget last June.

The FC/ASW could be based on a subsonic only, stealth missile with long range and heavy payload. Such a solution would probably be the most affordable one. But such a concept would show very few to no conceptual and technological breakthrough over already existing designs such as Lockheed Martin’s LRASM or even MBDA’s Naval Cruise Missile (NCM) already in use in the French Navy.

Supersonic speed could then be seen as the real competitive edge for the future FC/ASW missile. The concept displayed at Paris Air Show by MBDA clearly showed that the potential of such a design exceeded the sole air-launched cruise missile and sea launched anti-ship requirements of the FC/ASW. A heavy supersonic maneuverable missile could serve as a basis for land and sea launch cruise missile, anti-radar missile and even heavy air-to-air weapon.

But despite the advantages of a supersonic missile as anti-ship weapon, speed is rarely a requirement for land attack cruise missiles. While it may reduce the time-on-target, supersonic speed disadvantages are a reduced loitering time, higher probability of detection and likely a smaller military payload carried by the missile. Let alone higher cost per munition.

That’s why a third option could be based on two different missiles sharing as many components as possible. A subsonic air-launch weapon could then replace the Storm Shadow/Scalp missile, with more stealth and range and improved guidance and targeting systems. While a supersonic missile could be developed in order to replace the air and surface-launched anti-ship Exocet missiles in French forces and the last Harpoon missiles of the Royal Navy.

In France, such a solution could be seen as the most politically acceptable. Dividing the program in two different vehicles could enhance the overall performance of the FMC/FMAN system and provide some safety in the case of fund cuts or of a British withdrawal.

Could the Lancaster House agreement survive a hard Brexit ?

Besides the timing concern around the Interim SSGW in 2023, the spectre of a hard Brexit looms over all the Lancaster House led programs.

Yet, the Franco-British military cooperation does not depend solely on the EU-UK relationships and should not be affected by the Brexit. Last December, a French parliamentary report reassured French involvement in FC/ASW and recalled that the entire program was led after the Brexit was voted.

But a no-deal Brexit will certainly have negative repercussions on the industrial defense cooperation. While it is still possible that the ‘One MBDA’ initiative won’t suffer from a hard Brexit, uncertainty over the British economy in the following years could lead to cuts in the funding of major weapon programs. Political rapprochement between British and US administrations is also possible in this context. Both the AGM-158B JASSM-ER and AGM-158C LRASM could be considered cheaper, off the shelf options for FC/ASW, available as soon as 2023 instead of the early 2030’s at best.

If the second phase of the FC/ASW program isn’t launched next year, French (and/or British) forces will still have the possibility to start another project based on the studies already conducted by MBDA during the Concept Phase of FC/ASW – FMC/FMAN.

But after the UCAV and FCAS cooperation failures, another cancellation of a French-British joint program could virtually mark the end of the industrial cooperation part of the Lancaster House agreement.