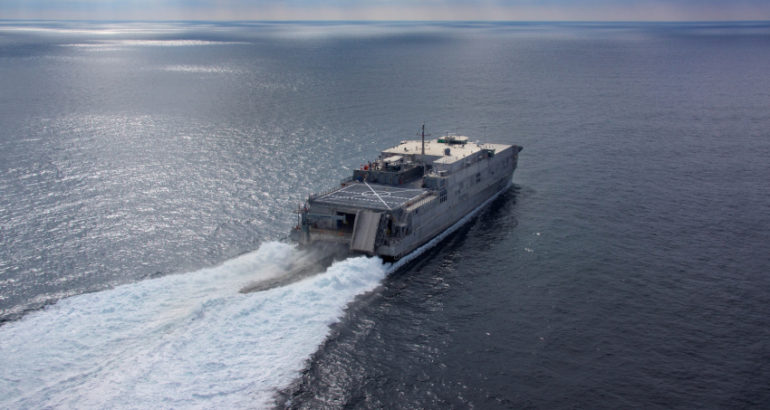 The first cut of metal for the future USNS Apalachicola (T-EPF 13) took place on August 19, 2019 at the Austal USA shipyard in Mobile, Alabama.

The future USNS Apalachicola will be the 13th Spearhead-class expeditionary fast transport.

Ten ships in the class were originally planned. On 16 September 2016, Austal was awarded a contract to design and construct EPF-11 and EPF-12. On 26 March 2019, the U.S. Navy awarded Austal a $262 million contract for the design and construction of two additional Expeditionary Fast Transport Ships, EPF-13 and EPF-14. This follows the long lead-time materials contracts awarded in October the previous year, of $57.8M for EPF-13, and in December $40.4M for EPF-14. Construction of EPF-14 is set to start in the middle of 2020.

Designed and built by Austal USA, the Spearhead-class EPF is 103 meters (338 ft) long and 28.5 meters (94 ft) in beam. The vessel has space for 41 crew members and accommodations for up to 150 people and an additional 312 seats for troop transport.

The EPF’s large, open-mission deck and large habitability spaces provide the opportunity to conduct a wide range of missions from engagement and humanitarian assistance to disaster relief, and from maritime security support operations, to intelligence, surveillance, and reconnaissance. The Expeditionary Fast Transport ships are performing valuable missions all over the world.

With a draft of only 13 feet and a unique propulsion system, its ability to access austere and degraded ports with minimal external assistance provides an overabundance of options to fleet and combatant commanders. Along with its draft, propulsion system, enormous mission bay and greater-than 40 knot speed, these ships have the potential to support future requirements in special operations, command and control, and medical support operations.