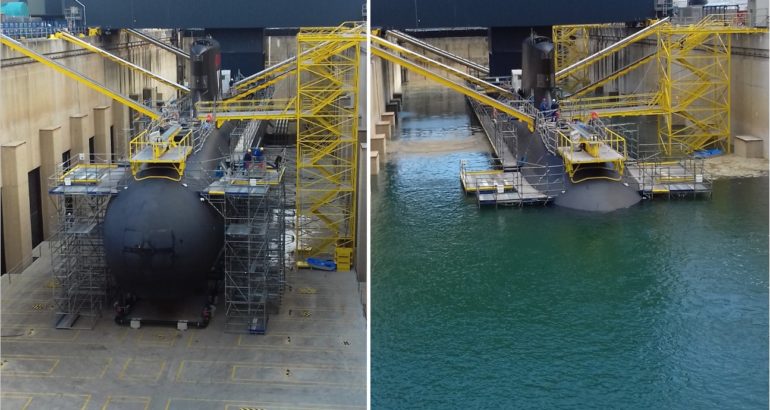 Suffren in the water for the first time. DGA picture.

Suffren was unveiled during a symbolic launch ceremony on July 12, 2019.

It was ‘launched’ a platform (which belongs to the DGA) which is lowered inside a dry dock, then the dry dock is flooded. More details in the infographic below.

The next steps for the next generation submarine of the submarine will be the fueling of its nuclear core at the INBS (installation nucléaire de base secrète) Cachin in Cherbourg: The loading of Suffren‘s nuclear core with fuel rods is set for September 2019. The first divergence of the nuclear reactor will take place in November after a set of dock-side tests and after a gradual increase in power of the nuclear boiler module of the submarine. The divergence marks the first operational startup of the reactor.

Suffren will start sea trials in the first quarter 2020. First around Cherbourg (where the first static diving will be conducted), then in Brest area (for deep diving tests) and finally in Toulon area (in the late summer/early fall of 2020) for tests of the weapon systems. Commissioning by the French Navy should take place in late 2020.

For more details about Barracuda type SSN, read our in depth article.