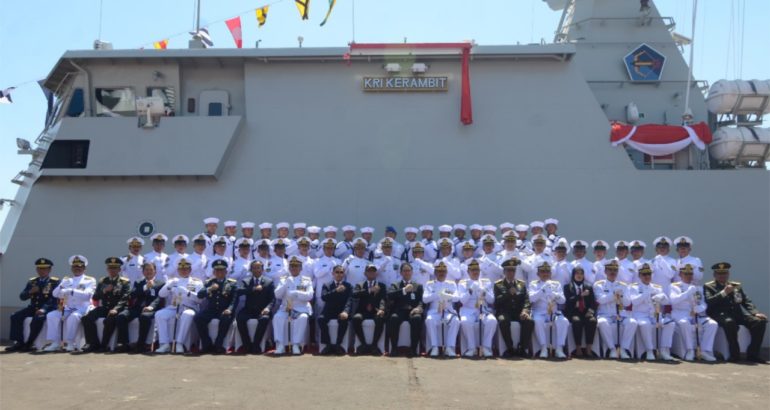 The commissioning ceremony took place at state-owned shipbuilder PT PAL in Surabaya in presence of the Indonesian minister of defense Ryamizard Ryacudu and navy chief of staff.

The vessel, named KRI Kerambit (627) was launched in February 2018 and is the fourth ship in the Sampari-class. First ship of the class, KRI Sampari, was commissioned with TNI AL on June 28, 2018.

A steel-cutting ceremony for two more vessels took place last week (August 2nd). A total of 18 ships of this class are planned. These 5th and 6th units are set to feature “more sophisticated technology” compared to the first four KCR-60M vessels. They are set to be delivered to TNI AL in May 2022.

According to PT PAL these ships are equipped with a complete weapons system such as surveillance radar, IFF system, CMS (3 Console), 57 mm Main Gun, Surface to Surface Missile Launcher, Secondary Gun 20 mm, ESM system, and Decoy Launching System. It can sail up to 5 (five) ) day and conduct various missions such as anti-surface warfare, and offshore patrols in territorial waters and Exclusive Economic Zone. In addition to the basic functions above, KCR-60M also have additional functions to conduct surveillance activities, as well as search and resuce (SAR).

Danish company Terma announced during IMDEX Asia 2019 that it was officially awarded the contract for delivery of a complete C-Series Combat Suite for four KCR-60 vessels.