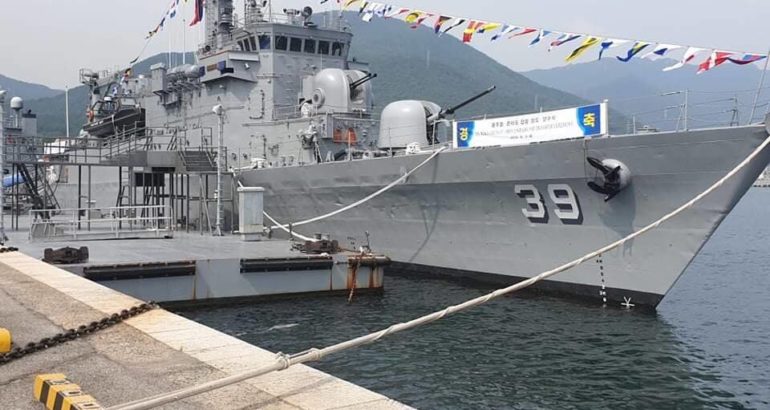 The Republic of Korea (RoK) Navy former Po Hang-class corvette Chungju was formally handed over to the Philippine Navy today, August 5, at the RoKN’s Jinhae Naval Base. Renamed BRP Conrado Yap (PS-39), the vessel will now sail to the Philippines.

« Yes, the BRP Conrado Yap, a Po Hang-class donated by the South Korean government will be handed over to the FOIC (flag officer in command, Vice Admiral Robert Empedrad), (Philippine) Navy on August 5 and will sail for the Philippines immediately thereafter. This is a second-hand, refurbished frigate, » the country’s Department of National Defense (DND) Secretary Delfin Lorenzana confirmed to the Philippine News Agency.

The Chungju corvette was officially decommissioned in December 2016 to be transferred to the Philippine Navy. The vessel will now be escorted home by the BRP Davao del Sur landing platform dock. After commissioning by the Philippine Navy, the BRP Conrado Yap ship will boost the service anti-submarine and anti-surface warfare capabilities.

The BRP Conrado Yap will be used for ASW training in preparation for transition to the future corvette vessels the Philippine Navy plan to purchase under a US$535 million acquisition plan approved last month by the Philippine President Rodrigo Duterte.

Commissioned in 1987, the Chungju corvette is 88.3 meters long and has a displacement of 1,200 tons. It accommodates a crew of 95 sailors and reaches an operational range of up to 4,000 miles. The weapons package includes two OTO Melara 76 mm guns and one DARDO 40 mm CIWS turret.