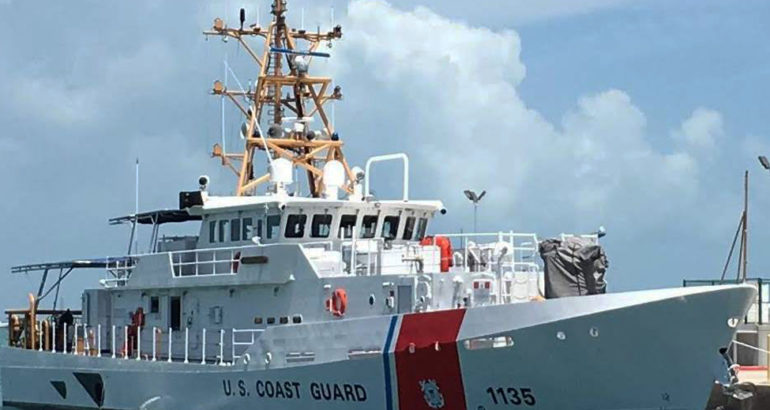 Bollinger Shipyards has delivered the USCGC ANGELA MCSHAN, the 35th Fast Response Cutter (FRC) to the U.S. Coast Guard. The Coast Guard took delivery on the 1st of August, 2019 in Key West, Florida.

The 154-foot Sentinel-class Fast Response Cutter has a flank speed of 28 knots, state of the art command, control, communications and computer technology, and a stern launch system for the vessel’s 26-foot cutter boat. The FRC has been described as an operational “game changer,” by senior Coast Guard officials. Recently, the Coast Guard deployed the FRC 1124, OLIVER BERRY from Hawaii across the Pacific to the Republic of the Marshall Islands. The 4,400 nautical mile trip marked the furthest deployment of an FRC to date.This trip showcases the hugely expanded operational reach and capability that the FRC provides.

Each FRC is named for an enlisted Coast Guard hero who distinguished him or herself in the line of duty. This vessel is named after Coast Guard Hero Angela McShan. MCPO McShan was a pioneer for women and African Americans. She was the first African American woman to be promoted to Master Chief Petty Officer.She served over two decades with great devotion and is remembered as an exemplary leader and professional. She inspired the many she trained, and has been described as a positive, kind and motivational person. MCPO McShan was a stellar performer, mentor teacher, and inspirational leader. The Master Chief Angela M. McShan Inspirational Leadership Award was established in her memory.

Up to 58 vessels are to be built by the Louisiana-based firm Bollinger Shipyards, using a design from the Netherlands-based Damen Group, with the Sentinel design based on the company’s Damen Stan 4708 patrol vessel.

USCGC ANGELA MCSHAN is set to be based in Cape May, New Jersey.