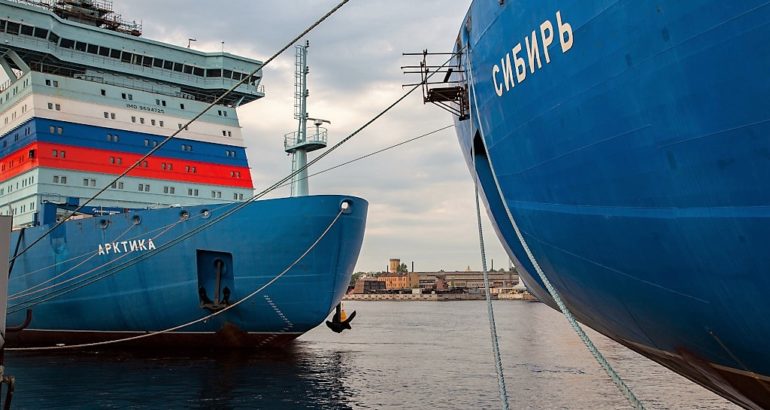 Russia's Baltic Shipyard (Baltiysky Zavod) announced they have won a 100 Billion Rubles ($1.5 Billion USD) contract from ATOMFLOT for the construction of the 4th and 5th Project 22220 nuclear-powered icebreakers.

FSUE (Federal State Unitary Enterprise) Atomflot or Rosatomflot (Атомфлот) is a Russian company and service base that maintains the world’s only fleet of nuclear-powered icebreakers.

Baltic Shipyard (a member of United Shipbuilding Corporation) was the sole bidder.

Once in service, the Project 22220 (also referred to as LK-60Ya) will be the largest and most powerful icebreakers ever constructed. They have a displacement of 33,450 tons and a length of 173 meters.

Project 22220 ships are equipped with two RITM-200 nuclear reactors, with a thermal capacity of 175 MW each. The propulsion power of this class of ships will be 60 MW which is why this class is sometimes referred as LK-60. The icebreakers have been classified by the Russian Maritime Register of Shipping (RMRS) as the ice class, Icebreaker9. The maximum icebreaking capability of project 22220 vessels is 3.0 m (9.8 ft). The vessels are intended for the Northern Sea Route along the Russian Arctic coast.

The Baltic Shipyard has production facilities and modern equipment for the construction of surface ships with nuclear power plants. The reputation earned by half a century of experience in creating atomic icebreakers, the unique knowledge and competencies passed down from generation to generation by designers, shipbuilders and power engineers gave the Baltic Shipyard the opportunity to receive a new order and continue the construction of a series of innovative icebreakers of project 22220.

“The five new powerful icebreakers will allow Russia to strengthen its leadership in the development of the Arctic,”

Baltic Shipyard is currently completing the construction of the 1st, 2nd and 3rd icebreakers: Arktika, Siberia and Ural. Arktika is expected to be commissioned in May 2020. The second and third vessels are set to be transferred to the customer in 2021 and 2022, respectively.