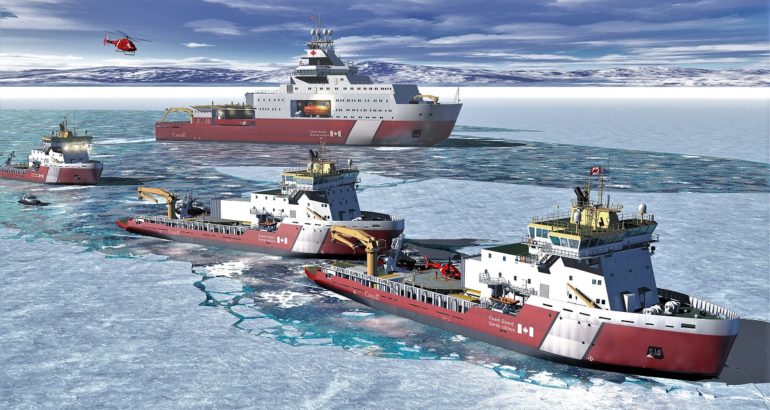 Artist impression of Project Resolute which consists in the conversion of existing ships for CCG use. (for illustration purpose)

Six New Icebreakers to be Built for Canadian Coast Guard

The Canadian Coast Guard will be procuring six new program icebreakers to replace its current ageing fleet of icebreakers.

The announcement was made on August 2 by Canada’s Minister for Fisheries, Oceans and the Canadian Coast Guard, Jonathan Wilkinson.

Minister Wilkinson also announced that the Government of Canada is officially launching a competitive process, through an Invitation to Qualify, to add a third Canadian shipyard as a strategic partner under the National Shipbuilding Strategy (NSS). This new shipyard will build the new program icebreakers for the Coast Guard.

“The Canadian Coast Guard saves lives at sea, maintains safe shipping, enables an otherwise ice-choked economy, protects the marine environment and supports Canadian sovereign presence in the Arctic. Demands on the Coast Guard will only grow as the impacts of climate change become more frequent and intense. By adding the new program icebreakers to renew the fleet, we are ensuring the women and men of the Canadian Coast Guard have the equipment they need to deliver icebreaking services in the Arctic, on the St. Lawrence waterway and on Canada’s East Coast.”

On May 22, 2019, Prime Minister Justin Trudeau announced that the Government of Canada is investing $15.7 billion to renew the Coast Guard fleet, with up to 16 Multi-Purpose Vessels to be built at Seaspan’s Vancouver Shipyards and two new Arctic and Offshore Patrol Ships to be built at Irving Shipbuilding Inc.

The new program icebreakers will replace the Coast Guard’s heavy and medium icebreakers that operate in Atlantic Canada and the St. Lawrence waterways during the winter and in the Arctic during the summer.  In Atlantic Canada, these program icebreakers help ensure year-long ferry service, escort ships through ice-covered waters and the clearance of ice from harbours and wharfs, which is essential to Canada’s commercial fisheries. In the Arctic, they provide icebreaking support to ships with vulnerable cargoes, such as dangerous goods and perishable products, and support vessels transporting cargo that is a vital part of the northern communities’ sealift and resupply.

The Canadian Coast Guard currently has a fleet of two heavy icebreakers (CCGS Louis S. St-Laurent and CCGS Terry Fox) and five medium icebreakers. Two interim medium icebreakers (Tor Viking and Balder Viking) are being converted for the CCG as part of poject Resolute, while CCGS John G. Diefenbaker, a Polar icebreaker displacing 23,500 tons, is set to join the fleet in by 2022.

A reader reached out to us to mention that CCGS John G. Diefenbaker will not join the fleet in 2022: “Some four years ago the delivery date was (optimistically) 2024 (source) but now there is no timeline (source). 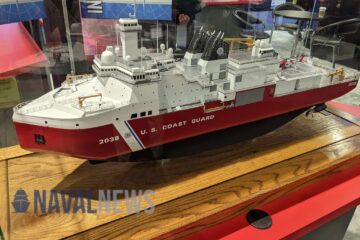