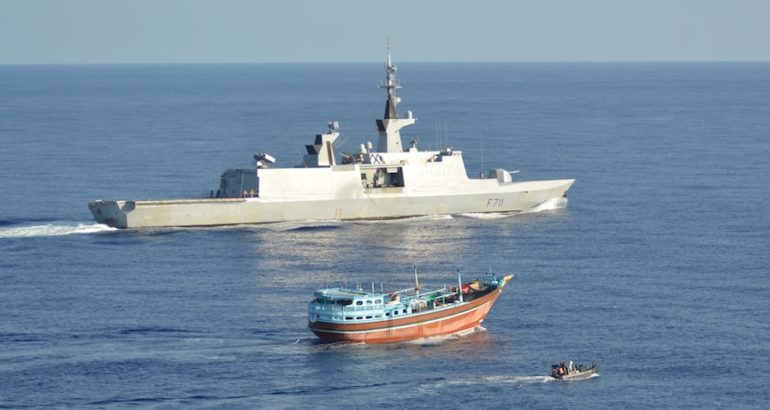 The French Navy frigate Surcouf in 2017 after a record drug seizure within the CTF 150 mission (Credit: French Navy)

Through maritime security operations, regional engagements and capacity building activities, CTF 150 works to deter and deny terrorist organisations any benefits from employing the high seas for smuggling illegal narcotics, which represents a common threat to the security and prosperity of the region. Member countries that contributed to CTF 150 success during the Pakistan-led rotation included Australia, Canada, France, Pakistan, the UK and the US, who all worked together in direct support in pursuit of Combined Maritime Forces (CMF) goals.

CMF is a multinational naval partnership which works with regional partners to ensure maritime security and stability. This partnership consists of three task forces which deal with a range of threats from non-state actors such as piracy and the smuggling of illicit materials.

During the ceremony at the CMF headquarters in Bahrain, command of CTF 150 was passed from Commodore Alveer Ahmed Noor of the Pakistan Navy to Commodore Edward Ahlgren, OBE, Royal Navy. The event was presided over by Commander CMF Vice Admiral Jim Malloy of the United States Navy.

In his speech, Commodore Noor said: “Pakistan’s commitment to the UN resolutions is well established. The eleventh Command of CTF 150 by Pakistan Navy certainly demonstrates our continued commitments in support of CMF efforts for ensuring maritime security in the region. During our Command tenure, CTF 150 effectively contributed to CMF mission by seizing 25 175kg of narcotics leading to denial of approximately USD $19.5M to terrorist organisations. Furthermore, CTF 150 units remained vigilant and poised to respond to any emergency call for assistance to the maritime community.”

Over the last 4 months, units under CTF 150’s command have carried out 15 successful boarding operations despite the unfavorable weather during the month of May, June and July.  CTF 150 has been committed to building maritime counter-terrorism capability in regional navies and to promoting regional security and stability.

Vice Admiral Malloy praised the Pakistan Navy on their successful command of CTF 150 by saying: “The professionalism of the Pakistan led CTF 150 has been exemplary. This is the eleventh time CTF 150 has been commanded by Pakistan and is unsurpassed by any other nation. The Pakistan Navy has shown that hard work and commitment to the maritime security of the region can be achieved in an all too changing world. I would like to personally thank Commodore Alveer Ahmed Noor for his leadership and guidance and look forward to serving with you again in the future”

Within the seas of the region all manner of activity is undertaken: be it piracy, drug smuggling, arms running, people trafficking, migration or legitimate activity like trade, fishing or leisure.

Commodore Ahlgren is deeply honoured to be taking over responsibility for CTF 150 and maritime security in this region and recognises the challenges.

He said: “Delivering maritime security is becoming increasingly complicated. Threats are evolving rapidly, and the adversary is not always evident. In a world where constant change is the only certainty, security in the maritime domain cannot be achieved by one organisation with limited assets – it’s a team effort from all of us.  We, as the incoming CTF 150 team, look forward to being part of this great venture and making new friends along the way.”

This is the tenth time the UK has commanded CTF 150, with the last occasion being May to August 2018, when, similarly to this command, it was a joint Royal Navy – French Marine National venture. France also has a long and successful track record in the lead of CTF 150, commanding the task force alone nine times since 2003.

“Combined Task Force 150’s Area of Operation includes some of the world’s busiest shipping lanes and spans over 3.2 million square miles. This area is a vital artery of world trade from the Far East to Europe and the United States and covers three of the world’s strategic ‘choke points’. Within the seas of the region all manner of activity is undertaken: be it piracy, drug smuggling, arms running, people trafficking, migration or legitimate activity like trade, fishing or leisure.  In all of that, it is about finding the bad guy amongst a sea of people,” Commodore Ahlgren explained.

Vice Admiral Malloy concluded; “Today we welcome Commodore Edward Ahlgren, who will lead CTF 150 as a combined UK, French team. Today marks the tenth time the United Kingdom has dedicated a leader and superb staff to command CTF 150 – a number surpassed only by Pakistan! I have full confidence that commodore Ahlgren will continue the legacy of great CTF 150 leaders that precede him. I am honored and grateful to serve with you and will work to ensure your success”.