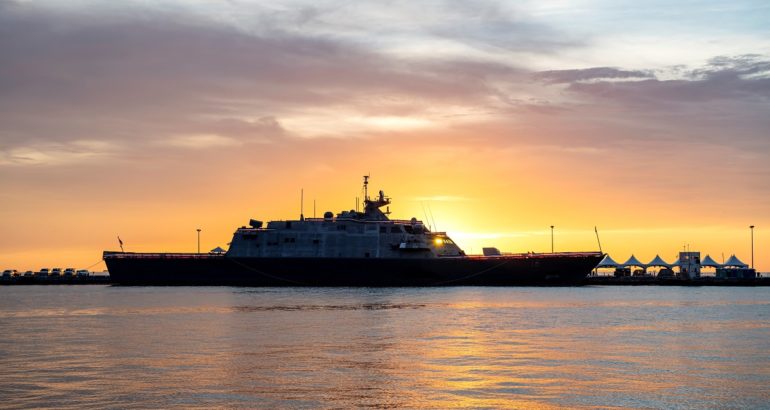 The sun sets behind LCS 15, the USS Billings, on Friday, Aug. 2, 2019, the evening before its commissioning in Key West, Florida. Lockheed Martin picture.

The ship is named in honor of Billings, the largest city in Montana, as well as the people and military veterans of the state. The future USS Billings will be the first ship of its name in naval service.

“Having now commanded two freedom class LCS variants, I would like to report that these ships are truly impressive and will fit well in the niche they have been designed for. “They are fast, maneuverable, and their weapon systems are some of the most accurate I’ve witnessed on any platform of which I’ve previously served.”

“Billings was designed to operate and adapt to a rapidly changing environment. She is equipped and ready for today’s threats and easily modifiable to meet the threats we may not even be aware of yet. Our team is confident Billings will be what the Navy needs when the fleet needs it.”

There are seven ships in various stages of production and test at Fincantieri Marinette Marine in Wisconsin, where the Freedom-variant LCS is built. The next Freedom-variant in the class is LCS 17, the future USS Indianapolis, which was delivered in late July.

The LCS class consists of two variants, the Freedom variant and the Independence variant, designed and built by two industry teams. The Freedom-variant team is led by Lockheed Martin, Marinette, Wisconsin (for the odd-numbered hulls). The Independence variant team is led by Austal USA, Mobile, Ala., (for LCS 6 and the subsequent even-numbered hulls).