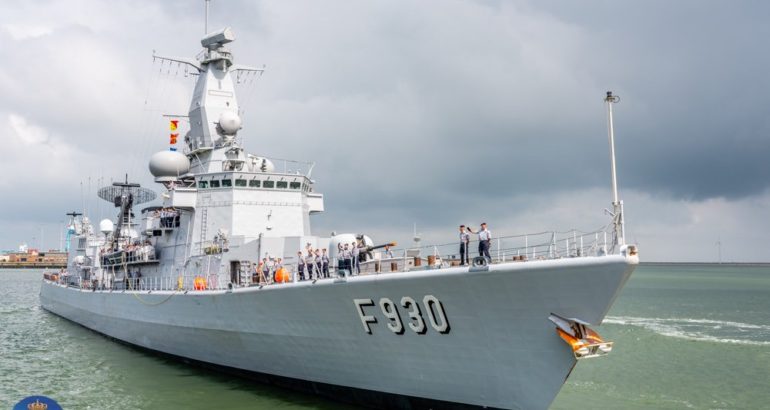 Leopold I, a Karel Doorman-class frigate of the Belgian Navy set sails from Zeebrugge naval base to join Nato's SNMG1.

Leopold I, a Karel Doorman-class frigate, and also the flagship of the Belgian fleet, set sails today from Zeebrugge naval base.

These four groups comprise the core of the maritime component of the Very High Readiness Joint Task Force (VJTF) to the NATO Response Forces (NRF), providing timely maritime support to NATO operations in a contingency. Additional forces could be added to these groups, with the NATO command staff onboard and the ships of the group as the nucleus.

As part of SNMG1, Leopold 1, will be capable of being deployed at short notice around the world. The group is currently under US Navy command, with the Arleigh Burke-class destroyer, USS Gridley(DDG-101) acting as its flagship.

Leopold 1 will participate in two high-end NATO exercises in the framework as well as in smaller exercises in Canada and the United Kingdom.

The Leopold I frigate is 122 meters long with a displacement of 2,800 tonnes and a crew complement of 160 sailors. It is fitted with 8x Harpoon anti-ship missiles, 16x RIM-7 Sea Sparrow surface-to-air missiles and torpedoes for anti-submarine warfare. It also has a 76mm main gun and a Thales Goalkeeper Close-in Weapon System for self-defense.

Prior to March 2007, the ship was known as the HNLMS Karel Doorman (F827) in the Royal Netherlands Navy. Leopold I along with sister-ship Louise Marie were two “M-class” frigates procured by Belgium from the Netherlands in December 2005. They are set to be replaced with new generation frigates as part of a joint program with the Netherlands. The first frigate will be delivered to the Royal Netherlands Navy in 2024, while the first frigate for the Belgian Navy will be delivered in 2027.