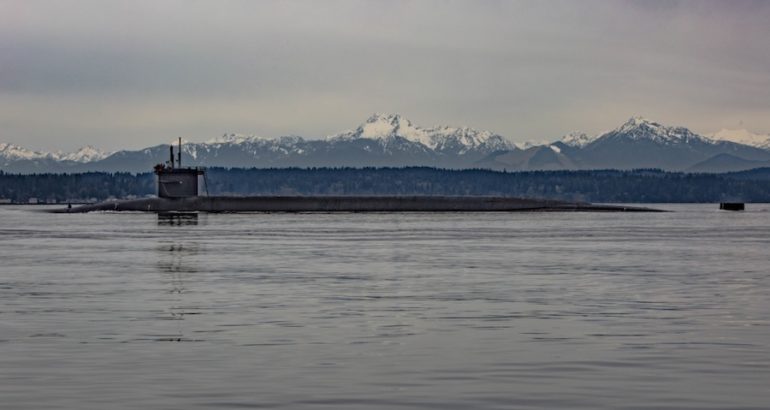 Almost 400,000 man-days of work by the shipyard’s Ohio project team, ship’s force, contractors and others were needed to return Ohio to the fleet. Major repairs included preservation and structural work on the submarine’s sail, tanks and superstructure.

“Our central focus on the Ohio project has always been to provide the maintenance required to quickly return this naval warship back to the fleet in support of our national defense capability,” said Project Superintendent Christopher Byron. “Since joining the Ohio project, I have witnessed team members consistently demonstrating the values that our command upholds – integrity, teamwork, ingenuity, excellence and service.

“I couldn’t be more proud of this team and look forward to a strong continued relationship with the SSGN sailors on board Ohio and the supporting submarine community.”

Ohio’s maintenance period began on April 25, 2017, when – fresh off a 20-month Pacific deployment – the ship arrived in dry dock for the start of its availability.

Originally commissioned as the lead boat of its class of ballistic missile submarine fleet on November 11, 1981, Ohio was also the first submarine to be converted to a guided missile platform. The conversion ended when the Ohio returned to service as an SSGN in 2006.

“Days like today are a perfect example of why we do what we do,” said Capt. Dianna Wolfson, PSNS & IMF commander. “Ohio plays a vital role in America’s defense, and we’ve returned it to the fleet, ready to do whatever our nation requires of it. We can all take great pride in the work our team did for the ship, and we wish her and the crew well as they rejoin our naval forces on patrol.”

Combined, the four SSGNs represent more than half of the Submarine Force’s vertical launch payload capacity with each SSGN capable of carrying up to 154 Tomahawk land-attack cruise missiles. The missiles are loaded in seven-shot Multiple-All-Up-Round Canisters (MACs) in up to 22 missile tubes. These missile tubes can also accommodate additional stowage canisters for SOF equipment, food, and other consumables to extend the submarines’ ability to remain forward deployed in support of combatant commanders’ tasking. The missile tubes are also able to accommodate future payloads such as new types of missiles, unmanned aerial vehicles, and unmanned undersea vehicles.

The SSGNs have the capacity to host up to 66 SOF personnel at a time. Additional berthing was installed in the missile compartment to accommodate the added personnel, and other measures have been taken to extend the amount of time that the SOF forces can spend deployed aboard the SSGNs. The two forward most missile tubes were permanently converted to lock-out chambers that allow clandestine insertion and retrieval of SOF personnel. Each lock-out chamber can also accommodate a Dry Deck Shelter (DDS), enhancing the SSGNs’ SOF capabilities.