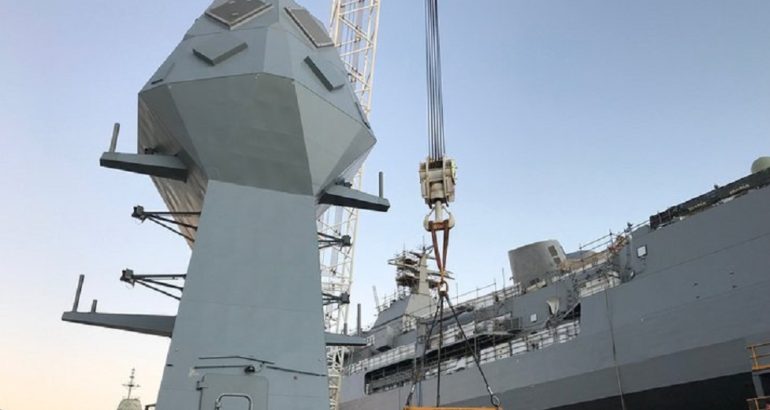 HMAS Anzac’s new mast has been installed in the next major milestone as part of the ship’s Mid Life Capability Assurance Program (AMCAP) being undertaken at BAE Systems Australia’s Henderson facility.

The new mast is the second to be manufactured by BAE Systems as part of the Warship Asset Management Agreement (WAMA) between BAE Systems, SAAB Australia, Naval Ship Management (NSM) and the Commonwealth of Australia.  The achievement follows the successful installation of the first mast onto the HMAS Arunta late last year.

Around 650 people are currently working on the upgrade of the Anzac frigate fleet, including 400 BAE Systems Australia employees.

The mast installation is one of the last major works on the HMAS Anzac ahead of her undocking late this year. She will then undertake sea trials ahead of a planned return to service in 2020.

The replacement mast is taller and wider than the existing mast so that it can accommodate the new CEA L-Band radar system, while retaining the existing Anti-Ship Missile Defence (ASMD) radar capability. The new L-Band high power active phase array radar incorporating an integrated ‘Friend and Foe’ capability replaces the previous AN/SPS-49(V)8 radar system. This new radar compliments the existing ASMD radar system and is  integrated into the existing Combat Management Systems of the ship by SAAB Australia.

HMAS Anzac arrived at Henderson in September 2018. As part of her AMCAP upgrade she will have:

As well, the Control and Monitoring System of the ship has also received a technological refresh, replacing existing analogue technology with digital. This is the first time such a technology refresh has been undertaken on such a large scale on the Anzac Class ships and follows the successful upgrade to HMAS Arunta completed earlier this year. Integration of the communications system into the existing ships data communications systems has been closely managed during design by Melbourne based defence communications company Leonardo.

“The new Australian L-Band active phased array radar will provide the RAN with a world-leading capability that will support its operational requirements well into the future.”

Naval News Staff 07 Jan 2022
BAE Systems has received a contract from the U.S. Navy for the maintenance and modernization of USS Mitscher (DDG 57)...