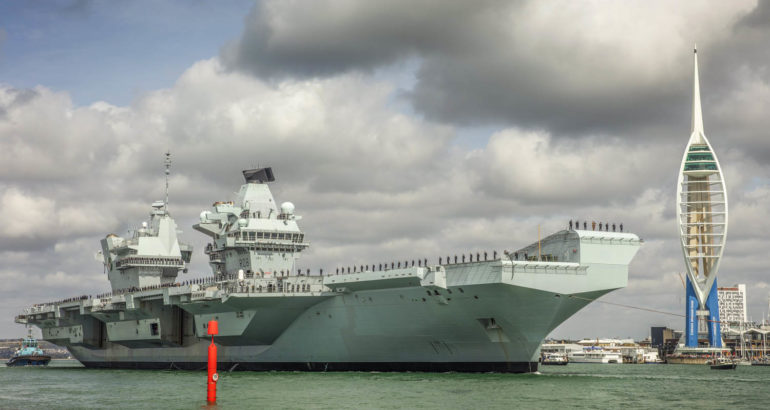 The Royal Navy HMS Queen Elizabeth aircraft carrier has sailed from her homeport Portsmouth on August 30 ahead of testing the UK’s F-35B Lightning fighter jets for the very first time.

The Royal Navy HMS Queen Elizabeth aircraft carrier has sailed from her homeport Portsmouth on August 30 ahead of testing the UK’s F-35B Lightning fighter jets for the very first time.

The Royal Navy’s biggest warship will be working with up to seven British F-35B jets during her Westlant 19 deployment, which sees her once again return to the east coast of North America.

This deployment marks another significant milestone for the aircraft carrier, which will have Royal Navy and RAF jets embarked during five weeks of testing, as well as hosting F-35s from the United States Marine Corps.

Ahead of full operations in 2021, the carrier, F-35s and supporting units will be rigorously tested under realistic warfighting scenarios, visiting Canada and the USA during the three-month mission.

“To command any warship is a privilege but to be able to command HMS Queen Elizabeth during this pivotal phase of her capability development is a real honour. Westlant 19 is a hugely exciting deployment and as we increase the scale and complexity of our training and testing, so the potency of this extraordinary ship continues to grow. In addition to my core ship’s company, the fixed and rotary wing air assets, enhanced medical capability, Royal Marines and other force elements from across Defence will enhance HMS Queen Elizabeth and the UK’s Carrier Strike capability on this deployment.”

This potent group of British ships will also be joined by units from the United States Navy, US Air Force and US Marine Corps.

Royal Marines from Lima Company 42 Commando, based in Plymouth, and Fleet Air Arm assets will also embark on Westlant. They will include Merlin helicopters and Wildcats from Culdrose-based 814 and Yeovilton-based 815 Naval Air Squadrons. Commando Helicopter Force’s 845 NAS are also embarked in their role as the wings of the Royal Marines.

On top of that, a Role 2 Medical Team Afloat, RAF airmen and British Army soldiers will also be on board.

Commander of UK Carrier Strike Group, Commodore Mike Utley said: “The success of last year’s deployment during which we embarked and operated the F-35B for the very first time put us ahead of the curve in terms of developmental testing between the jets and ship.

“We have a significant switch in focus this year, towards operationalising this national defence capability; turning this ship, the jets for which it has been built and all supporting units into a cohesive, agile, efficient force.

“Whether that’s warfighting at one end of the scale, peacekeeping at the other end or delivering humanitarian support across the globe. Our first operational deployment in 2021 is not far away and we will be ready for any eventuality.”