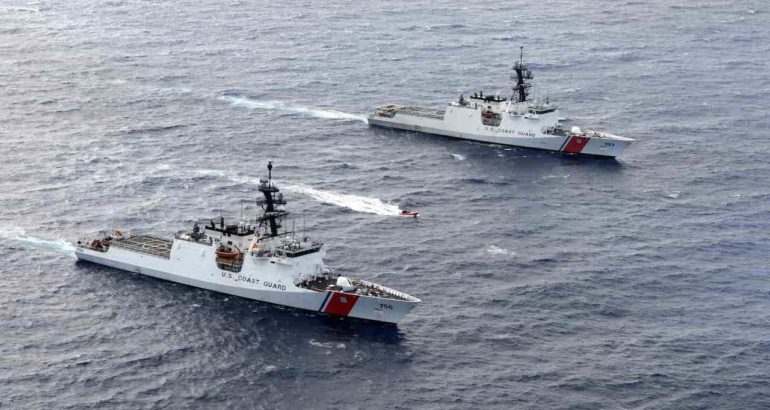 The US Coast Guard commissioned the seventh and eighth national security cutters (NSCs), Kimball and Midgett, at their Honolulu homeport Aug. 24. The unique joint commissioning ceremony marks the official start of NSC operations in Honolulu where the cutters will carry out activities to safeguard the nation’s maritime safety, security and economic interests.

Adm. Karl Schultz, commandant of the Coast Guard, presided over the ceremony. “In today’s complex geostrategic environment with rising great power competition, the importance and demand for a strong Coast Guard presence in the Pacific has never been greater,” Schultz said.

Sumner Kimball, the seventh cutter’s namesake, served as superintendent of the Revenue Marine, establishing a training school that would later become the U.S. Coast Guard Academy. He later was general-superintendent of the Life-Saving Service (LSS) from 1878 until the LSS merged with the Revenue Marine to become the U.S. Coast Guard in 1915. Kimball’s work lead to great strides in standardization of training and equipment.

The eighth cutter was named after the Midgett family and their history of distinguished service in the Coast Guard that continues to this day. At least ten members of the family have earned high honors for their heroic life-saving efforts. One member of the family, Chief Warrant Officer John Allen Midgett Jr., led crewmembers of his lifeboat in heroically rescuing the entire 42-member crew from the British tanker Mirlo after it was torpedoed off the coast of North Carolina in 1918. For his bravery despite the rough seas and fires from the tanker’s cargo, he was awarded the Gold Lifesaving Medal. The 378-foot high endurance cutter (HEC) John Midgett (WHEC 726) was named in his honor.

The NSC acquisition program addresses the Coast Guard’s need for open-ocean patrol cutters with the seakeeping, habitability, endurance and technological advancement to serve as command and control centers in the most demanding maritime environments. The 418-foot NSC fleet features advanced command, control, communication, computers, intelligence, surveillance and reconnaissance equipment; aviation support facilities; stern cutter boat launch; and long-endurance station keeping. The legend class cutters are replacing the 378-foot HECs, which have been in service since the 1960s.

These newest NSCs are already on their way to making significant operational contributions. Coast Guard Cutter Midgett completed two interdictions of suspected low-profile go-fast vessels in the Eastern Pacific Ocean during the transit to Hawaii, the first July 25 and the second July 31. The boardings resulted in a combined seizure of over 6,700 pounds of cocaine, estimated to be worth over $89 million.

The service awarded a contract option in December 2018 for construction of the 10th and 11th NSCs.

U.S. Coast Guard to hand over Protector-class boats to Uruguay

Naval News Staff 11 Feb 2022
The United State and Uruguay finalized an agreement for the transfer of three decommissioned Coast Guard patrol boats to the Uruguay Navy.