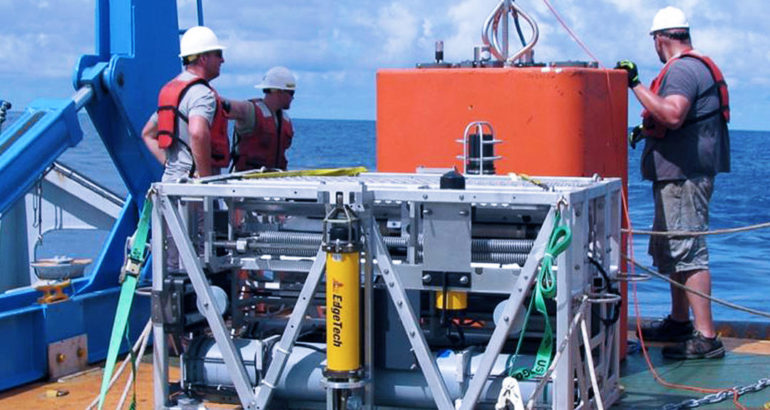 TRAPS is a rapidly deployable, low-cost, persistent, deep-ocean sensor system for long-range passive Anti-Submarine Warfare with nodes deployable and effective across a variable duration based upon operational usage. Leidos picture.

Leidos was awarded a follow-on contract by the U.S. Navy to provide submarine detection sonar services.

Leidos engineers will help the Navy’s Maritime Surveillance Systems Program Office achieve long-range detection and classification of submarines in deep water environments through the fabrication, testing, and delivery of Transformational Reliable Acoustic Path System (TRAPS) prototype units. Leidos originally developed the TRAPS system under a Defense Advanced Research Projects Agency contract awarded in 2014. Since then, the company has continued to develop and field TRAPS Prototype Systems in support of U.S. Navy operations and has been the sole provider of these systems since the program’s inception.

“This award underscores our continuous support to the Navy’s Undersea Warfare mission area and further emphasizes our commitment to both fixed, deployable and mobile acoustic surveillance capabilities. Our team will continue to provide warfighters with innovative, cost-efficient solutions that modernize, upgrade, and improve the technical performance of the TRAPS Prototype Systems in a critical domain.”

The quiet submarine is an asymmetric threat in terms of its cost and consequential growth in numbers relative to our legacy maritime platforms. In addition, these submarines have trended toward lower acoustic signature levels and have grown in lethality. DARPA’s Distributed Agile Submarine Hunting (DASH) program intends to reverse the asymmetric advantage of this threat through the development of advanced standoff sensing from unmanned systems.

Deep ocean sonar nodes will operate at significant depths in open ocean areas to achieve large fields of view to detect submarines overhead. Each deep node is the maritime equivalent of a satellite, and is referred to as a subullite. The significant field of view, along with the advantage of low-noise phenomena at extreme depths will permit a scalable number of collaborative sensor platforms to detect and track submarines over large areas. For the vast shallow continental shelf areas, the program similarly adopts distributed mobile sensors, but instead leverages insights in non-acoustic sensing from above.

The program developed two prototype systems. The first prototype is the Transformational Reliable Acoustic Path System (TRAPS). TRAPS is a fixed passive sonar node designed to achieve large-area coverage by exploiting advantages of operating from the deep seafloor. The second prototype is the Submarine Hold at RisK (SHARK), an unmanned underwater vehicle (UUV) designed to provide a mobile active sonar platform to track submarines after initial detections are made. The SHARK UUV conducted successful deep dive testing in February 2013. Subsequent efforts may follow to realize multiple sonar nodes as well as the integration of the SHARK UUV with its sonar.