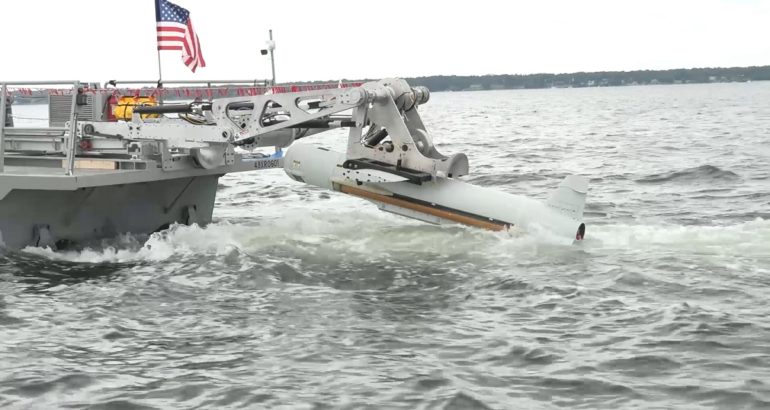 Held in late August, in Newport, RI, ANTX provided an environment where scientists and engineers can evaluate their technological innovations at the Research & Development level before their technology has to become militarized and interface at the operational level of the U.S. Navy.

First, Raytheon demonstrated its AQS-20C mine-hunting sonar, coupled with a surrogate for its Barracuda mine neutralizer, which worked together to detect and engage an object designed to mimic an undersea mine in the Narraganset Bay.

AQS-20C is an extremely capable towed mine hunting sonar system that can detect, localize and classify mine like objects at high speed. The AQS-20C towed body incorporates four distinct sonars that operated concurrently to allow the Navy to very quickly search an ocean area for both bottom and volume mines at a very high search speed. It uses advanced imaging sonars, signal processing and computer algorithms to provide real-time, computer-aided detection and classification against the full spectrum of mines. In other words, it pinpoints mine-like objects and provides visual images.

Barracuda is a semi-autonomous, unmanned, underwater vehicle that reacquires, identifies and destroys near-surface, volume and bottom sea mines detected by the AQS-20C Mine Hunting sonar. It can operate in operate in many ocean regimes and environments and is comprised of an expendable, modular neutralizer vehicle with a kill mechanism, propulsion, sensors and communications buoy, which transmits mission relevant information wirelessly back to the host ship. Initially, it will be launched from an unmanned surface vessel operating from a Littoral Combat Ship, but in the future, it could be launched from almost any platform with an A-sized sonobuoy launcher.

Second, the company also demonstrated its Unmanned Common Control System (UCCS) integrated with the mine hunting and neutralization capabilities to provide situational awareness of the demonstrated MCM mission. Raytheon’s UCCS has been designated as the U.S. Navy’s architecture for unmanned systems and vehicles which has been designed to manage multiple unmanned systems, including surface and air vehicles, from a single control station.

The ANTX demo showcased the Navy’s vision of a semi-autonomous, single-sortie, detect-to-engage mine clearance capability, which Raytheon fully supports. The success of the ANTX demo, including the autonomous engagement by a neutralizer, signifies a real technological turning point and the readiness of a number of enabling capabilities, including:

Looking forward, Raytheon is working with the U.S. Navy to advance SSDTE based on the recent demonstration results. And there are plans to further enhance mine hunting and neutralization through the application of machine learning to advance Automatic Target Recognition.