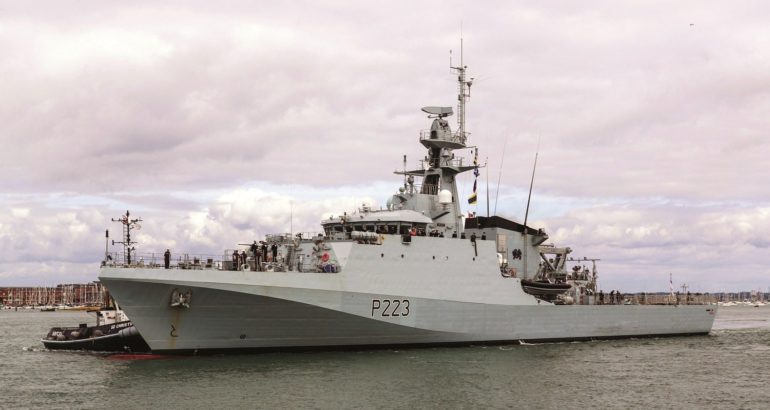 HMS Medway was commissioned into the Royal Navy during a ceremony at Chatham Dockyard on September 19, 2019.

The vessel is the second of the five Batch 2 River class OPV on order for the Royal Navy and built by BAE Systems. HMS Medway and the new OPVs provide much greater capability, including a flight deck, increased top speed and longer endurance at sea.

The better endurance of HMS Medway and her fellow class ships means they can be deployed overseas as well as in home waters. They will undertake a variety of roles, including counter-terrorism, anti-smuggling, maritime defence and counter-narcotics as well as securing the UK’s borders and protecting UK interests around the globe.

Today marks the culmination of five years of hard work. Getting HMS Medway to this point has taken huge effort and it has been incredibly rewarding to deliver a brand new warship to the Royal Navy.

The first steel for HMS Medway was cut by BAE Systems in June 2015 in Glasgow. The ship’s company then moved on board in May 2019 and the ship first sailed in June, joining her sister ship HMS Forth in Portsmouth.

HMS Medway then began sea trials that were completed in just 75 days which according to naval records is the shortest time since World War II.

The Batch 2 OPV programme of five state-of the art vessels represents a Ministry of Defence investment of £648m providing 800 jobs for Clyde shipyard BAE workers; retaining their skills whilst demonstrating new production processes vital to the production of the Royal Navy’s new Type 26 Frigates. All five Batch 2 OPV’s are to be delivered to the Royal Navy by 2021.