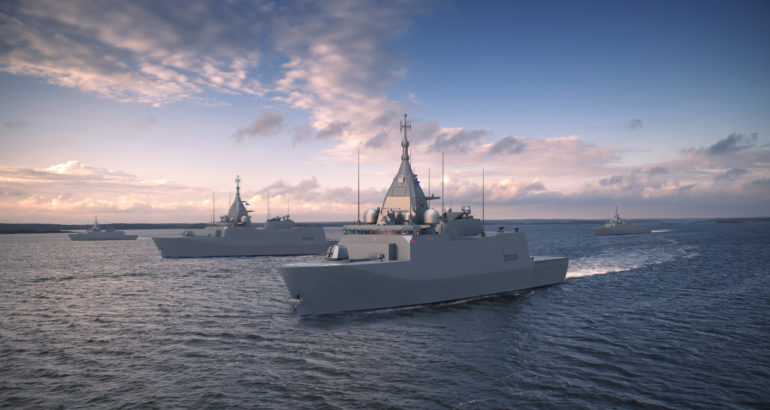 In accordance with Finland’s Ministry of Defence’s proposition, the Government of Finland has today selected Saab as the combat system provider and integrator for the Finnish Navy’s four new Pohjanmaa-class corvettes within the Squadron 2020 programme.

Finland’s Ministry of Defence has stated that the contract is scheduled to be signed on 26 September 2019 and that the order value will be 412 million Euro.

“This announcement marks a major milestone in Saab’s relationship with Finland and we look forward to continuing to support the Finnish Navy’s capabilities with our world-leading combat system expertise”, says Anders Carp, Senior Vice President and head of Saab business area Surveillance.

I am very happy with the contract that was just signed. We will get a squadron that will meet both Finland’s peacetime and wartime needs, Harju summarises.

The contract period will be 2019-2027 and the scope will include a range of solutions, including Saab’s 9LV Combat Management System, related sensors and other systems.

Saab’s 9LV technology is able to interface many subsystems, and its architecture readily scales to corvettes and large frigate or destroyer-type vessels. These solutions will typically support a high number of MFCs. They meet the demanding needs of battle resilience through extensive redundancy and physical separation of critical assets.

Medium-sized configurations often focus on one type of mission, such as anti-submarine warfare (ASW) or surface warfare (SuW) using surface-to-surface missiles (SSM). Larger configurations provide a wide range of capabilities and typically include multiple tactical data links and highly automated tactical responses to a range of simultaneous threats, above and below the surface. They also integrate with command support systems to provide the ship with complete C4I capability. Saab delivered more than 250 combat system to over 20 navies around the world in countries including Sweden, Finland, Norway, Australia and Canada.

Together with the existing four Hamina-class missile boats, the four new corvettes will form the backbone of the Finnish Navy from the mid-2020s onwards by replacing seven older vessels that have been or are due to be decommissioned: the minelayer Pohjanmaa, two Hämeenmaa-class minelayers and four Rauma-class missile boats. The Pohjanmaa-class corvettes will be constructed in Finland for reasons of security of supply.