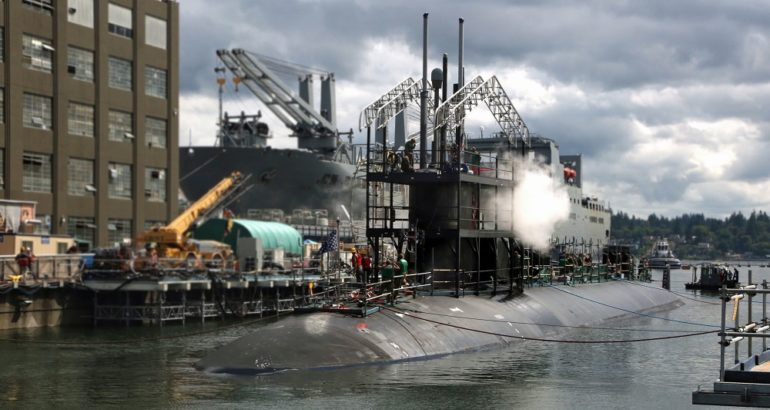 Connecticut had moved out of the shipyard’s Dry Dock 4 on Aug. 10 to put the finishing touches on its five-and-a-half-month period of maintenance and modernization, formally known as a docking continuous maintenance availability.

Shipyard personnel invested more than 30,200 man-days into the effort on Connecticut, which began March 26 when the sub entered dry dock.

“Maintaining and modernizing warships and returning them to active service is what we’re all about, so this is yet another important milestone for our shipyard. Our team, which includes PSNS & IMF employees, ship’s force and contractors, did a tough job very well, and I couldn’t be more proud of their efforts to send Connecticut back to the fleet in tip-top shape, ready for whatever the nation requires of it.”

One of three Seawolf-class submarines in the U.S. Navy’s fleet, Connecticut was commissioned on Dec. 11, 1998. It is the fifth vessel by that name, and its motto is “Arsenal of the Nation.”

The Seawolf design was intended to combat the threat of advanced Soviet ballistic missile submarines such as the Typhoon class, and attack submarines such as the Akula class in a deep-ocean environment. Seawolf-class hulls are constructed from HY-100 steel, which is stronger than the HY-80 steel employed in previous classes, in order to withstand water pressure at greater depths.

Seawolf submarines are larger, faster, and significantly quieter than previous Los Angeles-class submarines; they also carry more weapons and have twice as many torpedo tubes. Though lacking VLS, the Seawolf-class has eight torpedo tubes and can hold up to 50 weapons (including UGM-109 Tomahawk cruise missiles for attacking land targets) in its torpedo room. The boats also have extensive equipment to allow shallow water operations.

The third ship of the class, USS Jimmy Carter (SSN 23), has a 100-foot hull extension called the multi-mission platform (MMP). This hull section provides for additional payloads to accommodate advanced technology used to carry out classified research and development and for enhanced warfighting capabilities. MMP allows the launch and recovery of Remotely Operated Vehicles (ROV) and Navy SEALs. The MMP may also be used as an underwater splicing chamber for tapping of undersea fiber optic cables. This role was formerly filled by the decommissioned USS Parche.