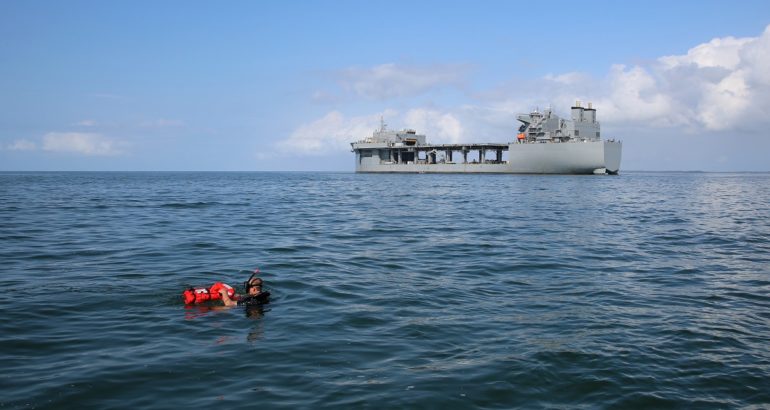 During the underway, the ship conducted a demonstration using the mission package portable control station to maneuver the MCM equipment, launch and recovery equipment, as well as test the command and control of unmanned vehicles. The demonstration proved ESB class ships’ ability to serve as an MCM capable platform to embark 12 twenty-foot equivalent units, vehicles, and the support equipment required to operate, launch, and recover one full MCM mission package, including the buried mine hunting and unmanned sweeping mission modules, with flexible ship modifications.

“Considering the contested environments which our ships sail in, counter-mine capabilities are very important because we have to be able to keep the enemy at bay. Mines of today are very inexpensive to make. Our adversaries can produce mines for a few hundred dollars and inflict a tremendous loss of life while causing millions of dollars of damage. So we need the assets out there to detect and destroy these threats ahead of time, and keep the world’s shipping lanes open.”

Representatives from Program Executive Office for Ships (PEO Ships) and Program Executive Office for Unmanned and Small Combatants (PEO USC) had overall responsibility for the planning and execution of the integration event, with support from the Naval Sea Systems Command’s Engineering Directorate, Naval Surface Warfare Center Panama City and Carderock Combatant Craft Divisions, and Mine Countermeasures Detachment 22. Personnel from Military Sealift Command (MSC) and ship’s force conducted ship operations, navigation, and maintenance of the ship systems during the course of the demonstration.

“This demonstration highlighted the inherent modularity of the Mine Countermeasure Mission Package,” said Capt. Godfrey Weekes, Littoral Combat Ships Mission Modules Program Manager, PEO USC. “The ability to deploy the MCM capability from this ship is a true force multiplier.”

Initial assessments showed positive results and will help inform the feasibility of integration on ESB, as well as other vessels of opportunity. This integration demonstration represents the potential to provide increased agility to our operational forces as they respond to the growing complexity of sea-mines while shifting to a broad-spectrum cross-domain, expeditionary approach.

With a large flight deck, as well as fuel and equipment storage, repair spaces, magazines, and mission spaces, the ESB platform continues to demonstrate tremendous adaptability.

“This successful demonstration shows the versatility of the ESB platform to bring capability to the fleet through expanded expeditionary warfare mission sets,” said Capt. Scot Searles, Strategic and Theater Sealift Program Manager, PEO Ships. “Our teams worked collaboratively to develop and implement innovative designs that expand our operational advantage and provides tremendous benefit to our warfighters.”

The Littoral Combat Ship and its mission capabilities remain critically important to the Navy. With the introduction of FFG(X) and Multi Mission Surface Combatant (MMSC) in the near future, in addition to a burgeoning fleet of unmanned surface and subsurface vehicles, PEO USC is ideally positioned to play a critical role in the Navy’s drive to boost innovation and increase the pace of technological change in the fleet.