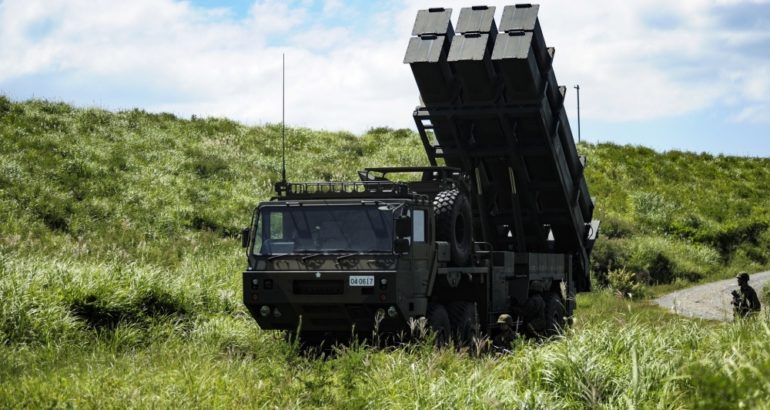 The Japan Ground Self-Defense Force (JGSDF) and the US Army conducted their first ever combined anti-ship drills in Japan, as part of the annual Orient Shield exercise, according to pictures released by the US Army Japan press office.

Orient Shield 19 is the largest annual bilateral field training exercise in Japan that will occur through Sept. 24. Since its inception in 1985, Orient Shield exercises have focused on tactical operations alongside the JGSDF. « Now, the focus is aimed at strengthening military operations through proficiency of multi-domain operations utilizing the capabilities of air, land, long-range precision fires, space and cyber operations, » the USINDOPACOM press office stated at the OS 19 opening ceremony, on Sept. 5.

The 17th Field Artillery Brigade is participating as the as the U.S. Army’s Multi-Domain Task Force (MTDF). This is the first time the MDTF has participated in Orient Shield conducting bilateral operations with the Western Army JGSDF. Among other assets, the MDTF deploys M-142 HIMARS artillery systems.

If the US Army didn’t detailed the bilateral operations it is conducting with the JGSDF, it should be noted that HIMARS systems could have been involved in anti-ship drills with the Type 12 Surface-to-Ship missile system operated by the JGSDF 5th Surface-to-Surface Missile Regiment.

Other JGSDF assets include the 4th division (16th infantry regiment), the 2nd anti-aircraft artillery brigade and the Western army artillery troops. These are the units in charge of defending Kyushu and Okinawa.

Japan has been stepping up its Anti-Access / Area Denial (A2/AD) solutions, fielding a network of anti-ship and electronic warfare systems in its Southern islands (the so-called “first island chain”). The newly created amphibious bridage of the JGSDF will also be in charge of defending these islands.

As an artillery system, HIMARS can not target ships directly but may be used as decoy (to saturate and consume enemy air defense weapons) before Type 12 missile system attacks. Obviously, flight profiles are different between surface-to-ship missiles and rocket, and well trained ship crews should be able to differentiate between the SSM and the rocket acting as a decoy.

However, at last year’s RIMPAC exercise, the HIMARS conducted an anti-ship attack exercise in cooperation with the Type 12 SSM with this role. A role that could quickly evolve thanks to the US Marine Corps.

Under the Navy-Marine Expeditionary Ship Interdiction System (NMSIS), the US Marine Corps is looking at adding more punch to the US Navy’s anti-ship capabilities with the procurement of (land based) coastal defense batteries. Three missiles are currently under consideration: Lockheed Martin’s new Long-Range Anti-Ship Missile (LRASM), Raytheon/Kongsberg Naval Strike Missile, and Boeing’s Harpoon. Companies submitted their final proposal in December 2018. The USMC is considering three wheeled platforms to launch the future anti-ship missiles, which are the M142 HIMARS, as well as the Medium Tactical Vehicle Replacement (MTVR) truck and the Logistic Vehicle System Replacement (LVSR) from Oshkosh Defense. According to US sources, the USMC plans to test prototypes in the spring of 2020.

In May this year, it was announced that the USMC will be procuring Naval Strike Missiles from Raytheon. It is for now unclear whether this procurement is linked to the NMESIS program or not. Contacted by Naval News, Raytheon referred us to the USMC who didn’t return emails.