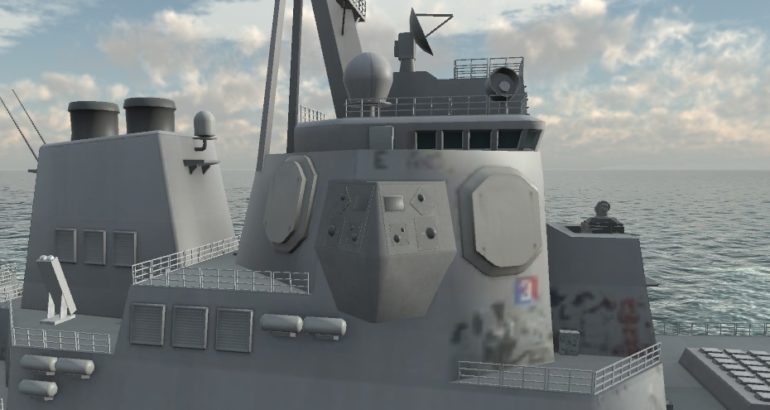 Three SEWIP block upgrades have been established and a fourth is planned. SEWIP Block 3, being developed by Northrop Grumman and the U.S. Navy Program Executive Office Integrated Warfare Systems (PEO IWS), adds electronic attack to the SLQ-32(V) EW system, and is a cornerstone capability that will meet the urgent operational needs of the Fleet. The timing couldn’t be more important, as the pace and complexity of emerging threats continues to escalate.

In January this year, Northrop Grumman announced it had successfully reached a Milestone C decision from the U.S. Navy, reflecting the government-led review of the technology’s performance and readiness. The company’s navigation and maritime systems division soon launched low-rate initial production (LRIP) of the SEWIP Block 3 AN/SLQ-32(V)7 system. That same month, Northrop Grumman opened a multi-million dollar, state-of-the-art high-bay facility, specifically designed for integration and testing of the system’s hardware and software.

After successfully completing the manufacturing readiness assessment, demonstrating proven processes and equipment in place, the team launched material procurement and has started manufacturing the first two LRIP systems. An important milestone was recently reached with the production of the 500th RF module, Transmit and Receive components used in the SEWIP Block 3 system.

As progress continues, Northrop Grumman is on track for targeted installation of the first SEWIP Block 3 system in 2021 on an Arleigh Burke-class guided missile destroyer.

Flexibility of the System

With a long legacy of leadership and innovation in electronic warfare, Northrop Grumman has provided expertise to the legacy AN/SLQ-32 EW system for over four decades. Today, with the Navy now recognizing the electromagnetic spectrum as a distinct warfighting domain, Northrop Grumman has continued to invest in advanced capabilities in electromagnetic maneuver warfare (EMW) and has introduced a number of innovative approaches to harness the full potential of the SEWIP system.

SEWIP Block 3 provides game-changing capability for non-kinetic electronic attack options, and the system has the potential to do much more. From advanced communications to multi-role waveforms, the multi-function applications for SEWIP Block 3 will provide enhanced mission capabilities to the Fleet while presenting opportunities for future cost-savings and reduced size, weight and power.