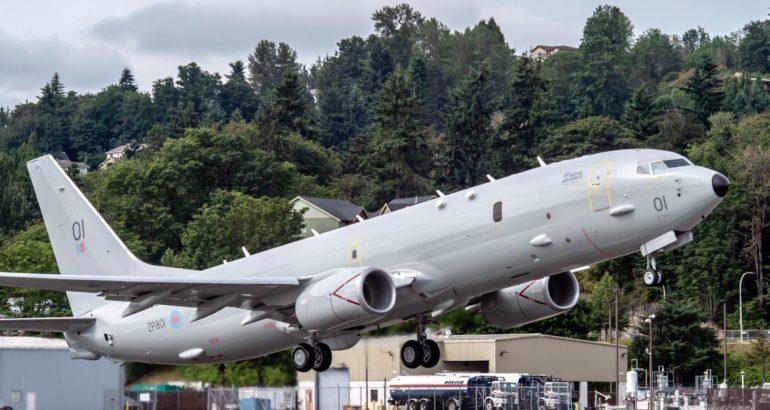 The first Boeing P-8A Poseidon aircraft for the United Kingdom lifts off from Renton, Wash., for its inaugural flight. File RAF picture.

Boeing delivered the first of nine Poseidon MRA Mk1 (P-8A) to the Royal Air Force's 120 Squadron during a ceremony held October 29 in Seattle.

The RAF crew will fly the aircraft to Naval Air Station Jacksonville in Florida this week. They will continue their training which started in January this year, before the aircraft, known as ” Pride of Moray ” is flown to Lossiemouth (its permanent air base in Northern Scotland) next year.

The first Boeing P-8A Poseidon for the United Kingdom Royal Air Force (RAF) took off from Renton, Wash. at 10:00 a.m. Pacific on July 12, marking the first flight of this inaugural UK P-8A.

The first of the RAF’s Poseidon aircraft is expected to make its first appearance in the UK in early 2020. All nine aircraft will be delivered by November 2021. The submarine hunter will help to protect the UK’s nuclear deterrent, as well as the Queen Elizabeth class aircraft carriers. They will also work with the new Type 26 Frigates, which are currently being built in Scotland.

The United Kingdom is one of six international customers for the P-8A Poseidon. As a direct commercial sale, India has received eight of the P-8I variant to date with four more in production. The U.S. Navy is on contract to receive 111 with the potential for additional quantities based on the fleet’s needs. As a cooperative partner with the Maritime Patrol and Reconnaissance Program Office, Australia began receiving their P-8A aircraft in 2016 with eight delivered and four more in production; Norway will begin receiving their five P-8As in 2022; both New Zealand and South Korea have signed agreements with the U.S. Navy to purchase four and six aircraft respectively.

The Poseidon MRA1 is designed to carry out extended surveillance missions at both high and low altitudes. The aircraft is equipped with cutting-edge sensors which use high-resolution area mapping to find both surface and sub-surface threats.

The aircraft can carry up to 129 sonobuoys, small detection devices which are dropped from the aircraft into the sea to search for enemy submarines. The systems survey the battlespace under the surface of the sea and relay acoustic information via radio transmitter back to the aircraft.

The aircraft will also be armed with Harpoon anti-surface ship missiles and Mk 54 torpedoes capable of attacking both surface and sub-surface targets.

The aircraft will be flown initially by 120 Squadron which was originally stood up on 1 January 1918 and was the leading anti-submarine warfare squadron in WWII. 201 Squadron will also join the programme in due course.