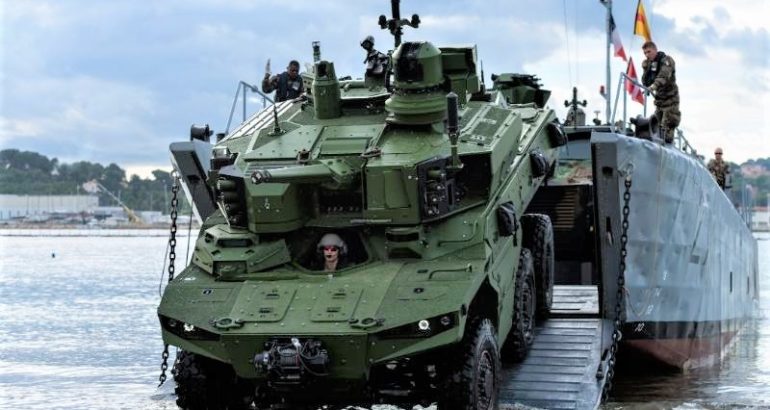 The tests consist in the embarkation and disembarkation of the vehicles aboard and from French Navy ship to shore connectors, namely the Landing Craft Utilities (LCU named CTM in French) and landing catamaran (named EDAR). The ageing CTMs will be replaced by the new EDA-S starting in mid-2020.

The ongoing Jaguar and Griffon qualification tests program is conducted in collaboration between the French Armament General Directorate (DGA), the Technical Section of the French Army (STAT) and the industrial contractors: Nexter, Thales and Arquus.

The GRIFFON, Multi-Role Armored Vehicle (VBMR), is capable of filling a wide spectrum of missions and is set to replace the VAB. It was designed primarily with humans in mind: air conditioning system, space optimization, etc. The goal is to allow users to achieve their mission under optimum conditions. Ten versions will be developed: Troop Transport, Command Post, Health, Artillery Observation Vehicle, etc.

The JAGUAR, Armored Reconnaissance and Combat Vehicle (EBRC) will replace the AMX10RC and ERC90. It is equipped with a threat detection system including an acoustic detonation tracking system, a laser warning detector and a missile launch detector connected to the SCORPION joint vetronics system. On-board simulation will allow the crew to train within a regiment without external means.

Both vehicles are part of the SCORPION program of the French Army which is a broad and ambitious modernization program consisting in the procurement of new vehicles and the update of existing ones with new capabilities: Integration of drones and robots into the combat system, communication with dismounted soldiers and multiple sensor management. The goal is to bring French troops into the era of collaborative combat.