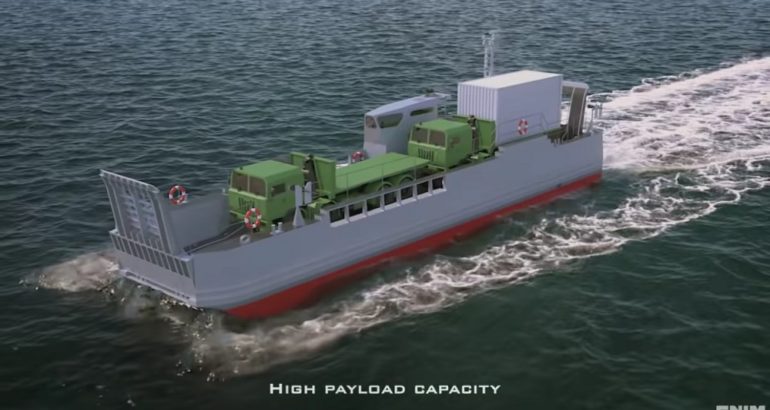 CNIM will deliver fourteen new landing craft (LCU type, designated EDA-S for “engins de débarquement amphibie standards” in French) to replace the the ageing “CTM” (previous generation of LCUs) in the French Navy (Marine Nationale). This contract reasserts CNIM’s status as a key partner to the French Navy and a European leader in the area of amphibious operations, supplying the complementary innovative vessels: EDA-S and EDA-R (also known as CNIM’s LCAT, already in service in the French Navy).

Acting as prime contractor, CNIM teamed up with its historic partners to carry out this program, namely naval architecture company Mauric for the study phase, Socarenam for construction (to be carried out at its Saint-Malo site in Brittany), and CNN-MCO for a first phase of maintenance of five years. In the long term, the three Mistral class LHDs of the French Navy are expected to integrate a total of eight EDA-S from Toulon. The remaining six landing craft are set to be based overseas (Djibouti, Mayotte, Nouméa, Fort-de-France and Dégrade-des-Cannes in French Guyana). The EDA-S will allow to restore an amphibious transport capability to the Overseas Bases of the French Navy. This capability was lost with the withdrawal of the last BATRAL-class LST in 2017, and not really restored by the d’Entrecasteaux -class B2M vessels which succeeded to the LST.

The EDA-S landing craft are to be built over a ten-year period. CNIM was competing against French shipyards Kership and CMN.

Unveiled at Euronaval 2018 (under its CNIM export name “LCA Landing Craft Assault”) the EDA-S will conduct amphibious operations from the
well decks aboard Mistral-class amphibious assault ships, carrying troops, military equipment or vehicles. They will be able to take part in logistics operations, depending on their location. They are also designed to evacuate citizens and recover air-dropped equipment during humanitarian missions.

Strong fit between the EDA-S and EDA-R amphibious craft
The EDA-S and EDA-R are complementary in terms of mission capabilities and speed; they have similar load capacities ( the EDA-S is designed to carry 65 tonnes in its nominal load configuration, and has a maximum load of 80 tonnes, equivalent to the nominal load of the EDA-R. ) and are both able to conduct amphibious operations in very shallow water (<1m deep).

Aboard a Mistral-class LHD, the French Navy can sail with either four EDA-S or two EDA-S and an EDA-R, as required.

EDA-S in details
The EDA-S is specifically designed for ground forces projection and aims at replacing existing fleets of vehicle transfert craft, such as the 30+ years old CTM (LCU) of the French Navy.

Ten-year contract
When confirmed, the overall EDA-S programme (including design, production and through-life support) will extend over a ten-year period. It comprises a firm tranche, covering the design and supply of six EDA-S craft (20 months for the first two, and 18 months for the following four) and a number of conditional tranches covering the construction of 8 EDA-S craft as well as support services for the whole fleet.