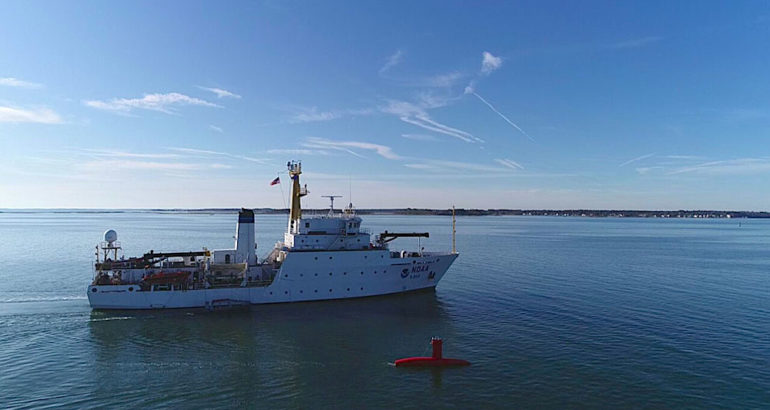 Drone photo of the DriX underway from the ship with the DDS still in the water. (Credit: NOAA/ENS Patrick Faha)

During the month of October, the US National Oceanic and Atmospheric Administration (NOAA) Ship Thomas Jefferson integrated and operated a DriX, an Unmanned Surface Vessel (USV) created by the French technology company iXblue.

The primary goal of the project was to test iXblue’s unique deployment and recovery solution specifically designed for Thomas Jefferson’s on board survey launch davit. Survey launches are limited to daylight operations and deployment and recovery are the most challenging operations the ship undertakes. Utilizing a DriX for continuous survey operations without having to recover and/or service it for up to four days straight would significantly increasethe ship’s efficiency.

There are a variety of USVs used for hydrographic survey operations. What makes DriX different is that it is designed by surveyors and is a proven packaged platform operating around the world.  Jeremy McCaffrey, an iXBlue surveyor and DriX operator explained that, “Hydrographic charting surveys have been completed in the Hapai Group (Kingdom of Tonga) and Dusky Sound (Fiordland, New Zealand). Drix has also been used for a variety of different surveys from offshore wind farm inspections to safety of navigation surveys.”

DriX is a 25-foot-long customizable USV that carries a multitude of survey sensors including a multibeam echo sounder and side scan sonar within its gondola. Before deployment, the team lowers the gondola and keel, giving the vessel about a 2-meter draft. The DriX carries a suite of sensors in its crow’s nest, including lidar, cameras, data radios, and its own position and orientation system. The automatic detection system, which uses an onboard lidar system, helped the vehicle avoid obstacles (including a curious seabird) during testing. 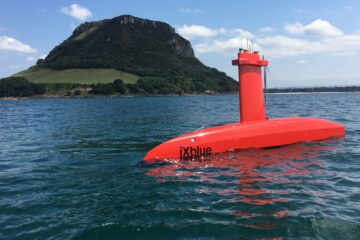