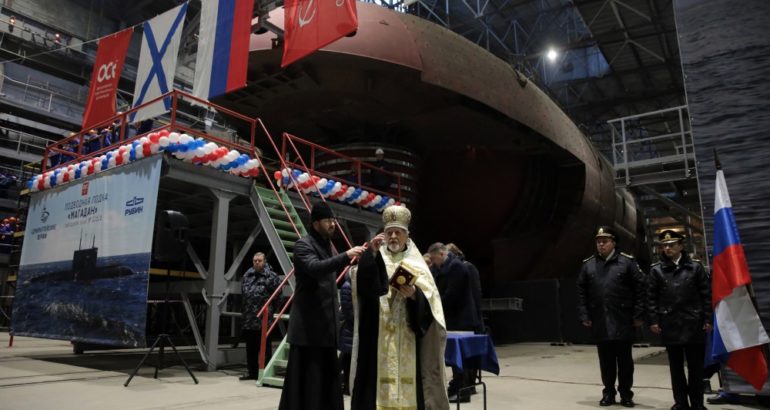 The Admiralty Shipyard laid two diesel-electric submarines of project 636.3 for the Pacific fleet.

They are the Ufa and the Magadan. Russian Navy Commander-in-Chief Nikolai Yevmenov and Admiralty Shipyard CEO Alexander Buzakov participated in the ceremony, the shipyard said.

“They are the third and fourth submarines built by the shipyard for the Pacific fleet. We are proud that the Admiralty Shipyard was entrusted with the construction of modern upgraded submarines. There is no doubt that all the six subs will be built on time with a high quality,”

“The previous series of submarines built for the Black Sea fleet confirmed its effectiveness by participating in combat actions. The new series for the Pacific fleet will be a major contribution into the strengthening of the Far Eastern borders of our country,”

The Defense Ministry signed a contract with the shipyard for the construction of six submarines for the Pacific fleet in September 2016. The first Petropavlovsk-Kamchatsky submarine completed acceptance trials on October 10. The second Volkhov submarine is to be floated in December. The construction of the fifth and sixth submarines is being prepared. The whole series is to be completed in 2022.

The Admiralty Shipyard laid the lead Novorossiisk submarine of the project in August 2010 and handed it over to the Navy after 49 months of construction in September 2014. Subsequent submarines were built faster. It took 37 months to build the Rostov-on-Don, 35 months for the Stary Oskol, 21 months for the Krasnodar, 24 months for the Veliky Novgorod, 25 months for the Kolpino.

The lead Petropavlovsk-Kamchatsky submarine for the Pacific fleet was laid on July 28, 2017 and floated on March 28, 2019. It is to join the Navy on November 25. The Volkhov is to follow in 2020. The currently laid the Ufa and the Magadan are likely to become operational in late 2021 and the first half of 2022.

The Admiralty Shipyard built 23 submarines of project 636 in 23 years.

Project 636.3 submarines (Improved Kilo by NATO classification) are the third generation of diesel-electric submarines which are most noiseless in the world. They develop underwater speed of 18 knots, submerge to 300 meters and have the cruising capacity of 45 days. The crew comprises 52 men, the underwater displacement is close to four thousand tons. They carry Kalibr missiles to strike at surface (3M-54 and 3M-541) and ground targets (cruise missiles 3M-14) and have new electronic equipment.