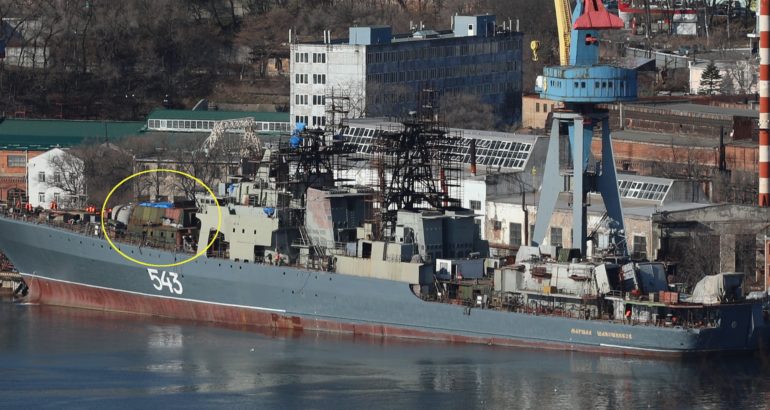 The Project 1155M / Udaloy-class Frigate Marshal Shaposhnikov has just came out of dry dock and the first photos of the ship appear to show two (or three) blocks of 3S-14 UKSK cells. The ship will be also equipped with 3S-24 launchers for Uran (SS-N-25 Switchblade) missiles. Picture © Silvist via wrk.ru

The Pacific Fleet’s Project 1155M frigate Marshal Shaposhnikov currently being upgraded has left the dry dock of the Dalzavod Shipyard in Vladivostok in Russia’s Far East and gone to the outfitting pier, the Defense Ministry’s press office said.

“During the stay in the dock, work was carried out to repair the ship’s outboard fittings and hull structures, mount electromechanical equipment, and lay foundations for new equipment,” the press office said.

“New sections of shaft lines were made, and the trunk lines were partially replaced and laid for new weapons. The upgraded ship was equipped with a missile system,” the press office added.

Along with the dock repairs, the ship underwent medium repair. More than 20 percent of the ship’s superstructure was dismantled and manufactured again as part of the upgrade.

After the ship left the dry dock, work started to prepare it for the first trials of its main propulsion plant at sea.

The Marshal Shaposhnikov was laid down in 1983 by the Yantar Shipyard as a large antisubmarine warfare ship.

Former Navy Commander-in-Chief Admiral Viktor Chirkov said at the 2015 International Maritime Defense Show that large antisubmarine warfare ships were included into the upgrade program and they would be armed with advanced missile systems. Later he added that the ships would receive Kalibr (NATO reporting name: SS-N-27 Sizzler) and Oniks (SS-N-26 Strobile) missiles.

It was reported in January 2017 that five Project 1155 large antisubmarine warfare ships in service with the Northern and Pacific Fleets would be upgraded and repaired at northern and Far Eastern shipyards by 2022.

Large-scale work will be carried out to renew the ship’s life support systems and radio technical weapons.

The Marshal Shaposhnikov will be able to fire Kalibr cruise, antiship and antisubmarine guided missiles. It will have two 3S-14 versatile vertical launchers with 16 launch tubes and a system controlling them.

According to open sources, the inclined Rastrub-B (SS-N-14 Silex) launchers are likely to be replaced by inclined Uran 3S-24 launchers. Two 3S-14 will be placed under the deck instead of an AK-100 gun and its ammunition storage in the bow.

The upgrade will extend the service life of the ships for at least 30 years and provide the Russian Navy with a sufficient number of warships until the Project 23560 and Project 22350M vessels become operational.