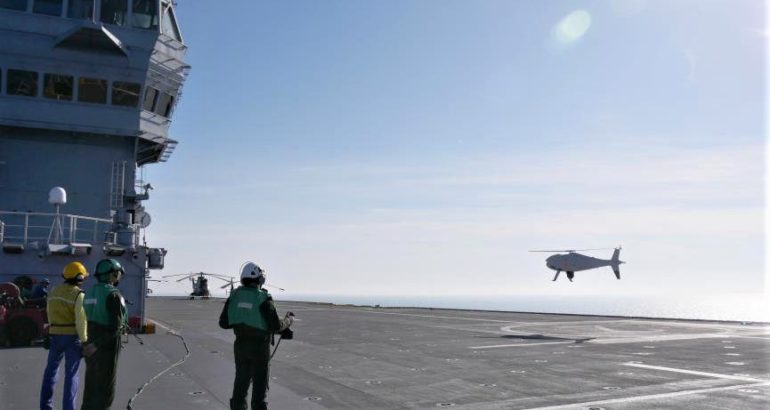 The French Armament General Directorate (DGA) announces that the Camcopter S100 VTOL UAV is now fully integrated with French Navy Mistral-class LHD Dixmude, stressing that for the first time in Europe, a rotary wing UAV is fully operational and connected to the combat system of a warship.

The first tactical drones capable of taking off and landing on a ship will soon achieve initial operational capability (IOC) with the French Navy, who is expecting these new tools to increase the surveillance, detection and identification capabilities of its surface vessels.

The integration of a UAV on an in-service vessel is a very complex operation that requires precise knowledge of the two systems and their interaction. It is above all essential to ensure the electromagnetic compatibility between the drone and the various sensors, radars and communication systems fitted aboard the ship. The take-off and landing area of the drone on the ship must also be precisely established. Next, it is important for the drone be connected to the ship’s combat system to benefit from its full potential in real time. Finally, the use of the drone from the vessel must be done according to specific procedures.

Acting as contracting authority, the DGA piloted all the technical stages, in close collaboration with the French Navy (the end user), Naval Group and Schiebel, from the collection of the operational requirements to the validation tests. To this end, the DGA relied on its technical experts and its testing capabilities that allowed the realization of numerous analyzes and detailed control operations to validate the technical choices.

Operational experimentation took over two years, after which the modification of the ship was carried out by Naval Group under the control of the DGA during an overhaul period in the spring of 2019. In addition to the essential cables and antennas, a dedicated workspace for drone operators was installed in the CIC, with a mission management console specifically designed to display and process live information gathered by the drone and provide an improved tactical situation. A connection has also been made with the on-board video network, to broadcast the images of the drone in the dedicated command zone aboard Dixmude (which can act as a command ship with a fleet commander aboard). This facilitates, for example, the monitoring of an amphibious operation.

In addition, the integration of the drone was designed to facilitate its implementation on a daily basis. Some examples:

Beyond its project management role, the DGA also acts as technical authority for state military aircraft as well as for navy ships. It is this transversal vision that has enabled the DGA to take up the challenge of integrating this drone aboard the Dixmude LHD, by guaranteeing the absence of any impact of the drone’s operation on the ship’s performance and safety.

Thanks to this unique know-how in Europe, the French Navy now has an initial tactical UAV capability: the Camcopter S-100 can be deployed day or night, within a range of several dozen kilometers.

The purpose of the SDAM ( Système de Drone Aérien pour la Marine) is to respond to the French Navy’s complete need and is currently undergoing a risk assessment study, notified at the end of 2017 to Naval Group and Airbus Helicopters. This study is to conclude with an at sea-test campaign of ​​a VSR700 demonstrator in 2021 on a multi-mission frigate. Beyond the constraints of navigability and the marine environment (aggressive electromagnetism, saline environment …) that are taken into account from the design of the system, the main technological challenge of the SDAM will be its ability to take off and land automatically (without human intervention) in adverse sea and weather conditions aboard several ship classes (FREMM, FREMM-DA, FDI …).

The necessary technological bricks are being matured as part of this study (specific actuators, predictors of platform movements, automatic deck-loading software block, specific data links). This technological demonstration benefits from the experience accumulated during upstream studies previously conducted by the DGA, such as D2AD, and operational experiments such as the one conducted with the S-100 Camcopter.

SDAM is expected to « automatically land and take-off, fly for ten hours at 100 nautical miles and carry 100 kilos of payload, i.e. radar and optronics, » explained the French Navy Chief-of-Staff admiral Christophe Prazuck Navy Prazuck in July, while talking about the program which calls for a medium size VTOL UAV to be deployed from surface combatants.