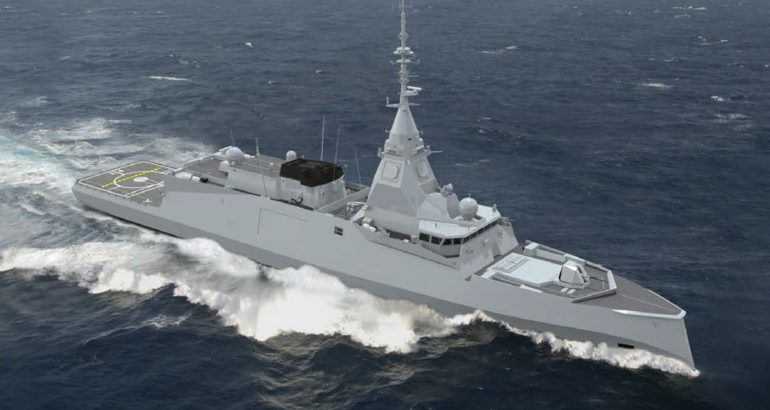 On October 24, the steel-cutting ceremony of the first FDI (Defense and Intervention Frigate) took place at the Naval Group shipyard in Lorient, in the presence of the Minister for the Armed Forces Florence Parly and the Chief of the Hellenic Navy Nikolaos Tsounis.

This steel cutting ceremony represents a first industrial milestone for Naval Group, in the continuation of a fast paced program. Indeed, main contracts for the FDI program were signed in 2017 for Naval Group and Thales, who is in charge of the development of a new generation radar, the SEA FIRE.

At the end of May 2019, the final configuration of the FDI design was frozen. In September, Thales started the SEA FIRE testing on a Shore Integration Facility (SIF) near Toulon. In the next couple of weeks, the Naval Group site of Lorient will operate an integration platform (PFI) to accelerate the development and validation of the ship’s IPMS (Integrated Platform Management System).

According to French plans, the first FDI named Amiral Ronarc’h will be delivered to the French Navy in late 2023. The second one, Amiral Louzeau, is set for delivery before the end of 2025.

The last three FDIs are due to be delivered before 2030, and will be named Amiral Castex, Amiral Nomy and Amiral Cabanier.

For Naval Group, reducing the duration of the development and production phase of its programs is seen as a strategic imperative.

Our industrial dynamic is based around our industrial target “C20/F30”, meaning that we want to be able to produce a corvette in 20 months, and a frigate in 30 months, which will have a very positive impact on our costs and competitiveness.

For the moment, Naval Group in Lorient demonstrated the ability to build a Gowind corvette in 25 months and a FREMM in 40 months. A lot of innovations will help to reduce the production schedules for the FDI, including the digitization of the industrial process, model engineering, augmented reality, additive manufacturing, etc.

Similar to the Gowind, the FDI will integrate a PSIM (Panoramic Sensors and Intelligence Module). The PSIM is an innovative mast that integrates the SETIS combat management system, the ship’s CIC and most of the sensors of the FDI. It is designed, produced and tested in parallel to the ship’s platform, facilitating the tests on the CMS, the crew training and the integration on the platform. According to Hervé Guillou, the PSIM allowed to reduce by 10 to 12 months the manufacturing cycle of the ships.

On the FDI, the PSIM will feature several sensors and processing systems:

The first digital combat ship of the French Navy

Among other innovations, the two Data-Centers in the FDI will radically disrupt the evolution of the ship during its lifetime. Traditionally, the French Navy undertakes one or two major overhauls of its warships, including the combat system’s hardware and software. On the new FDI, the Data Centers will enable uncoupling of the hardware and software elements of the CMS. The IT servers and computing modules could then be updated regularly without requesting to change the softwares. On the other hand, the SETIS system will evolve. New software updates, modules and functionalities could be added to the CMS without requesting a hardware update, just like apps on a smartphone.

All the computing power will rely on the two Data-Centers which permanently work as backups for each-other. The FDI will be natively protected against cyber threats, the Data-Centers widely reducing the number of entry points in the ship’s systems while being much easier to watch and secure.

At sea, the cybersecurity of the ship is ensured through another innovation of Naval Group, the CyMS.The CyMS supervisory console has particularly intuitive man-machine interfaces, enabling non-specialist crew members to monitor the cyber state of the platform and intervene in case of cyber attack or accident.

The crew of the FDI will also make more intensive use of augmented reality devices for their training and the maintenance of the ship. In partnership with Dassault Systèmes, Naval Group developed an extensive 3D model of the entire ship and its components, that can be superimposed  to the real environment. Such digital tools are already used by Naval Group for the industrialisation of its FREMM frigates, the Barracuda submarines and now the FDI frigates.

For example, HoloLens (Microsoft) augmented reality glasses are used in Lorient’s shipyard to ease the installation of some equipments on the ship, to control the quality of the assembly and to detect as soon as possible any particular problems.

The FDI are designed to intervene in every aspects of modern combat, thanks to its complete sensor suite and versatile weaponry.

The new SEA FIRE radar integrated in the PSIM will offer a 360° constant monitoring and tracking ability against high velocity and low RCS air and surface targets. SEA FIRE 500 can track up to 800 objects at a range of up to 500km for aerial targets and 80km on the surface.

Underwater, the ship is equipped with a KingKlip Mk.2 hull mounted sonar and a CAPTAS 4 Compact towed sonar, both from Thales.

For anti-aircraft and anti-missile intervention, the French FDI will have 16 Aster 15 or Aster 30 missiles in the two MBDA’s A50 VLS systems. The ship design may accommodate up to 32 anti-air or cruise missiles in four VLS systems.

Anti-ship missions will rely on 8 Exocet MM-40 Block 3C missiles. For self-defense against submarines, the FDI carries 2×2 MU-90 lightweight torpedo launchers, two on each side of the ship. Contrary to what is currently possible aboard the FREMM (or the vast majority of surface combatants), it will not be possible to reload the FDI’s torpedo tubes at sea. The ship will also be able to launch the CANTO anti-torpedo decoys designed by Naval Group, from a dedicated launcher developed by the shipbuilder.

The armament is completed by a Leonardo 76mm main gun, the standard caliber of the French Navy. The gun fire control system will be a Thales STIR EO Mk.2 using both radar and electro-optic tracking systems. STIR EO Mk.2 is currently integrated the two French FREMM DA (air defense variant), the Alsace and Lorraine, and could later be integrated on the FREMM ASM (ASW variant) as a replacement of the current EO-only fire control system.

Alongside the traditional naval threats, the FDI are designed from the beginning for the asymmetric warfare, both from a defensive and offensive point of view.

The FDI has accommodations for up 28 additional passengers, for example special forces, alongside the 125 crew members. Commandos can then operate from two ECUME RHIBs, or be deployed by the ship’s helicopter. The Exocet anti-ship missiles are also qualified for coastal strikes, but the French Navy is studying the use of the anti-tank MMP missile to counter small boats attacks and to support special forces operations.

The FDI’s hangar can accommodate a 11 tons helicopter alongside a SDAM, the 700kg VSR700 UAV by Airbus Helicopters selected by the French Navy to integrate its first rank frigates. The SDAM will offer increase surveillance abilities, including against small and fast targets, on both surface and land.

In order to secure the ship, the FDI will have for the first time a dedicated asymmetric warfare CIC, the Digital Combat Bridge (DCB) located in a room right behind the bridge. Linked to the SENIT CMS, the DCB is able to operate independently, for example when the ship is at anchor or in port. This asymmetric warfare center has access to the 360° cameras and the two PASEO-XLR and can remotely control two Nexter Narwhal 20mm guns and several non-lethal weapons, without exposing the crew to the threat.

Many export opportunities for the FDI design

FDI is the French version of the Belharra family by Naval Group. The French design has a displacement of 4,500 tons and is 122m long. But the Belharra is modular by design. Therefore, the French FDI will have provisional measures for two additional VLS system, and they are fitted for but not with next generation COMINT systems, jammers and/or anti-missile decoy systems that are currently under study by the DGA (Directorate General of Armaments).

For export customers, many more options are available. An additional hull module of up to 9m long can be added in the middle of the ship in order to accommodate more powerful engines, more fuel, larger facilities for special forces, UUW systems, etc. The main artillery gun could also be swapped for a 57mm or a 127mm, while a CIWS system like a Oerlikon Millennium or a RAM may be fitted on top of the helicopter hangar.

But the first customer of the Belharra will probably receive a ship almost identical to the French FDI: Indeed, a Letter of Intention was signed on the October 10th 2019 by the Greek Minister of Defence, Nicolaos Panagiotopoulos and the French Minister for Armed Forces, Florence Parly, for two FDI frigates. The level of commonality between the French and the Greek design will now depend on the delivery schedule expected by the Hellenic Navy.

Sylvain Perrier, Naval Group Director of the FDI program, confirmed to Naval News that the first export frigate could be delivered as soon as 2024, as long as the ship is ordered in an identical configuration to the French Navy’s one.

The two Greek frigates could then be delivered in the same timeframe as the French first three FDI, provided that they are ordered very soon. Interestingly, the necessity to share as much design as possible between French and Hellenic navies could lead to an increase in the FDI’s performances, especially if the Greek require jammers or 32 vertically launch missiles instead of the current 16.

It is also important to note that, among the officials attending the ceremony were the Polish naval attaché and New Zealand’s Ambassador to France.

Poland has been seeking to modernize its navy for a long time now, but with great difficulties. The decision for a new modern submarine capable of launching cruise missiles doesn’t seem to be a priority anymore. After discussing the purchase of new heavy corvettes and, more recently, second hand Australian frigates, the Polish Navy could now be interested by a mid-size multipurpose frigate, possibly built locally.

For Naval Group, New Zealand could be another excellent export opportunity. The Royal New Zealand Navy combat force relies on two 3,600 tons Anzac-class frigates that are currently undergoing an upgrade program, leaving New Zealand without any functioning combat asset. While the two Anzac frigates are nothing close to retirement, the increase in strategic competition among the Pacific islands will require additional means for the Royal New Zealand Navy, especially multipurpose frigates. As the Type 26 design already selected by the Royal Australian Navy and Royal Canadian Navy is probably too heavy and too expensive for Wellington, the Belharra family could be considered, with great interest.

Reporting from Lorient by Yannick Smaldore, editing by Xavier Vavasseur