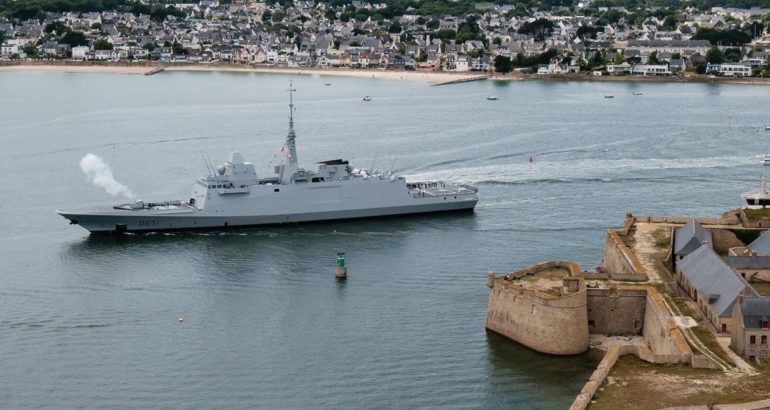 The French Armament General Directorate (DGA) took delivery of the FREMM Frigate Normandie from Naval Group. Normandie is the sixth and final anti-submarine warfare variant FREMM for the French Navy.

The delivery took place on July 16 2019, at the Marine Nationale naval base of Brest in Brittany, the home-port of Normandie (D651).

Normandie joins frigates Aquitaine (D650, first ship of the class) and Bretagne (D655) which are also home-ported in Brest.

Acting as project manager for the FREMM program in France, the DGA has completed the tests to verify the smooth operation of Normandie and its compliance with expected performance, in partnership with the French Navy and Naval Group.

According to the DGA, FREMM, designed and developed by Naval Group, is a stealth, versatile and enduring surface combatant with advanced automation. Its main missions are the control of a zone of maritime operation, anti surface (ASuW) and anti submarine (ASW) warfare, precision deep strike with naval cruise missile (it is the only class of NATO vessel in Europe with the capability to launch land attack cruise missiles from surface vessels), the deployment and support of special forces…

The FREMM can deploy the Caiman Marine (NH90 NFH) maritime helicopter, with unmatched ASW capabilities thanks to its FLASH dipping sonar and MU90 torpedoes. The FREMM-Caiman combo represents a cability gap in terms of ASW. The FREMM is also equipped with the Zodiac Milpro Ecume, the new tactical boat for naval special forces.

Meanwhile the construction of two FREMM multi-mission frigates with improved air defense capabilities – the Alsace and the Lorraine – is ongoing at the Naval Group shipyard in Lorient. They will be delivered in 2021 and 2022 respectively.

Furthermore, Naval Group teams are already launching the program for defence and intervention frigates (FDI) that will be delivered from 2023 onward. This first “fully digital” warship will benefit from the latest digital technologies. The first cut of steel-sheets is expected in October 2019.

Heavily armed, the Normandie FREMM deploys the most effective equipment and weapon systems, integrating the SETIS software as well as the Herakles multi-function radar, the naval cruise missile (NCM), the Aster and Exocet MM40 missiles and MU 90 torpedoes.

With its expertise in weapons and armament testing and engineering within the Ministry for the Armed Forces, the Armament General Directorate’s (DGA) mission is to equip the French armed forces, prepare future defence systems, promote European cooperation and support exports.