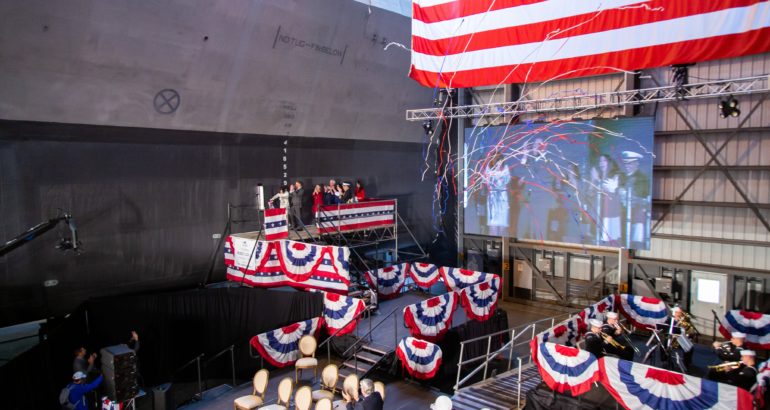 An audience of over a thousand dignitaries, community leaders, and Austal USA employees celebrated the christening of the future USS Mobile (LCS 26) today at Austal’s advanced ship manufacturing facility.

This is the third U.S. Navy ship christened in Mobile in 2019 and the fifth ship named after Mobile, Alabama.  Mobile is the 13th of 19 Independence-class Littoral Combat Ship (LCS) Austal USA has under contract with the U.S. Navy.

“This is the 20th ship we have christened over the last five years.“We are blessed to have christened so many ships through the years but this one is special. It is a distinct privilege to build a ship named after your namesake city and this has truly been a community effort. The support we have received from Senator Shelby, Senator Jones, Congressman Byrne, the county, and city has been incredible and has played a major role in our success to date.”

The Independence-variant littoral combat ship (LCS) is the most recent step in the small surface combatant evolution. A high-speed, agile, shallow draft, focused-mission surface combatant, the LCS is designed to conduct surface warfare, anti-submarine warfare, and mine countermeasures missions in the littoral near-shore region, while also possessing the capability for deep-water operations. With its open-architecture design, the LCS can support modular weapons, sensor systems and a variety of manned and unmanned vehicles to capture and sustain littoral maritime supremacy.

In addition to being in full-rate production for the LCS program, Austal USA is also the Navy’s prime contractor for the Expeditionary Fast Transport (EPF) program. Austal has delivered 10 EPF, with a total of 14 under contract. Austal USA is also leading the evolution of connector and auxiliary ships as Austal EPF designs for dedicated medical, maintenance, logistics, and command and control ships continue to impress fleet commanders.