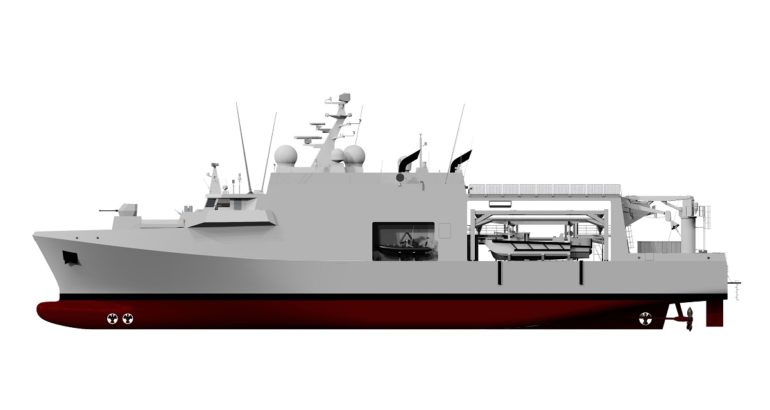 The Belgian-Dutch Mine Counter Measure (MCM) program is making significant progress according to Naval Group. After the successful initial trials, the French shipbuilder is quietly progressing towards the industrialization phase. The current ramp-up phase will soon result in the creation of a dedicated subsidiary in Belgium by year-end.

“These tests were carried out on self-propelled navigational scale models to demonstrate the ability of the system to launch and recover the unmanned surface vessel up to a sea state of 5, or a swell amplitude of 4 meters”.

Talking to Naval News during a recent interview, Eric Perrot said “This is undeniably a world first, in the sense that the system we are developing has been able to carry out 100% of launch and recovery maneuvers, regardless of the direction of the waves”.

This capability will give a significant advantage to the Belgian and Dutch navies, because the recovery of a drone in very adverse sea conditions considerably increases the operational time in which they can accomplish their missions. In a so-called “stand-off” operating mode, where the mother ship operates outside the minefield, this LARS system will therefore prove to be essential in the conduct of mine warfare operations.

“These trials are very representative of what sailors should expect in a real operational environment. The only thing not simulated is the wind, but it has little influence on this kind of operation. The cradle used does not reproduce all the characteristics of the real one but the preliminary project on the basis of which the model tested in the Netherlands was produced proved to be perfectly valid. This validation now allows Naval Group to initiate the detailed design, which will be followed by the selections of the companies which will produce the different parts of the system.” Perrot added.

A second campaign will start at the end of February, with a different goal: During the campaign carried out in November, Naval Group have only launched the drone and recovered it. “That means that the floating cradle was constantly in the water.” The future test campaign will rather focus on the kinematic phenomena encountered during the descent and ascent phases of the cradle. It will essentially be a question of sizing certain parts of the system.

The initial at-sea tests with the first-of-class ship and system are not expected before the end of 2022 or the beginning of 2023. This period is necessary to work on the industrialization of the system, which will first goes through a prototype phase. In addition, Naval Group will also need the prototype of the Inspector 125 unmanned surface vehicle (USV), currently designed by ECA Group, to conduct these first “full scale” tests.

Current status of the MCM vessel

Having the MCM vessel design frozen and validated, Naval Group is now involved in the ship’s engineering process.

“We reached the System Requirements Review milestone with the customer at the end of October, four months early compared to the date set in the contract. It was then a question of validating the interpretation of the 2200 technical requirements set out in the specifications “.

Next steps for the MCM vessel

The next milestone will be the System Functional Review in early April, during which Naval Group and the client will validate the functional architecture of each of the ship’s systems. By the end of 2020, the mother ship should have reached the Preliminary Design Review step, with which Naval Group will really enter the plans of the ship.

Construction of the first ship is set to start in the first half of 2021. “The date is not completely fixed yet, but the launch of the construction of the hull will take place necessarily at that time, for delivery no later than May 23, 2024, or 60 months after the contract came into effect. ” explained Naval Group’s MCM program director.

The industrialization phase will also make it possible to materialize the partnerships promised with Belgian companies, laboratories and universities. The R&D part, first, will see Naval Group bring development themes centered on the integration of cybersecurity principles on military and civilian ships and on mine warfare systems. The effective start of this collaborative research work is conditional on obtaining European budgets.

“Naval Group is currently working on capturing these budgets, which will then be used to fuel collaborative projects carried out with our Belgian partners. We are preparing the responses to European tenders in collaboration with the Belgian Ministry of Defense, these projects must be carried by a member country”.

For the industrialization part, remember that Naval Group has made a commitment to provide compensation by dealing with Belgian manufacturers for the supply of products or services. “We are currently starting consultations with the manufacturers concerned”. The contribution of Belgian suppliers will begin to materialize in 2020 with the first purchase contracts, notably in the field of diesel engines.

Naval Group’s establishment on the Belgian territory will materialize in three different ways. First of all, there will be two collaborative R&D management cells with Belgian companies, start-ups and laboratories. The third location, which will ultimately be the largest, will be based on a new subsidiary created in Belgium at the end of 2019 and named Naval Group Belgium.

“This subsidiary aims to become the Naval Group business unit specializing in mine action vessels. It will therefore manage all of the commercial activity, then conduct the contracts captured by Naval Group in this area. ”

Of course, the industrial part of the programs won by this subsidiary will be organized according to the wishes of the customers. The Belgian-Dutch MCM program will in turn be relocated to Belgium once the first two boats have been delivered. Depending on Naval Group’s success in the mine-hunting market, the establishment of this new subsidiary could result in the creation of dozens of jobs in Belgium.