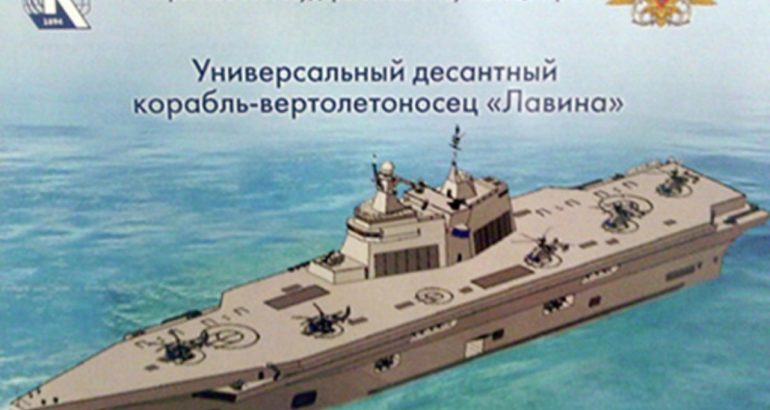 Artist impression of the "Priboy" amphibious assault ship / LHD designed by the Krylov State Research Center. The final design of the actual LHD selected by the Russian Navy is yet to be disclosed.

Russian media have recently reported the characteristics of prospective amphibious assault ships which are to be laid in the spring of 2020. They show that Russian Navy will obtain, although with a delay, universal landing ships for ship-to-shore connection. The Profile magazine writes about their characteristics and design.

The airpower reportedly comprises 20 helicopters. If that is true, the warship will have a classical aircraft-carrying architecture with a continuous flight deck. There will be 6-7 takeoff-landing pads. Pre-flight operations and maintenance of helicopters lifted to the deck before the pads are free will be done simultaneously.

The stern-pad architecture does not allow more than 3-4 helipads. All other helicopters, except for those on the helipads, have to be in hangars which does not allow engaging a big airpower.

The Navy planned to get amphibious assault ships with aircraft-carrying architecture several years ago when Russia ordered French Mistral in late 2010. The story of the warships which ended up in Egypt is well known.

The amphibious assault is two battalion or 900 men strong. Mistral can carry such a force for brief operations and 450 men for a long time. The unbuilt Soviet landing ship of project 11780 had to carry a thousand marines.

A lack of power plants is a major problem of modern Russian shipbuilding. The problem with gas turbines was partially resolved after production was launched in Rybinsk. However, Russia produces no modern diesel engines of the capacity required for amphibious assault ships.

A way out is to use available power plants, in particular, the combined diesel-gas M-55R installed on project 22350 frigates. The capacity of one Combined Diesel and Gas (CODAG) unit is 32700 HP (5200 HP of diesel 10D49 engine and 27500 of M-90FR gas turbine). The diesel and gas engines can operate together and separately.

Two M-55R with a total capacity of 65499 HP rotate two shafts and accelerate a 6000-ton displacement frigate to close to 30 knots. Experts believe the 25000-ton universal amphibious assault ship with such a power plant will have a maximum speed of 23-25 knots which is sufficient for warships of the class.

The US Wasp-class universal amphibious assault ships have a displacement close to 40 thousand tons and their 70-thousand HP power plant develops a speed of 24 knots. The diesel engine of Mistral develops the maximum speed of 19 knots.

The Soviet landing ships of project 11780 had to have a boiler-turbine power plant of project 956 destroyers: two main geared turbines GTZA-674 and four boilers KVG-3. The capacity was close to 110 thousand HP.

Read part 2 of this article at this link