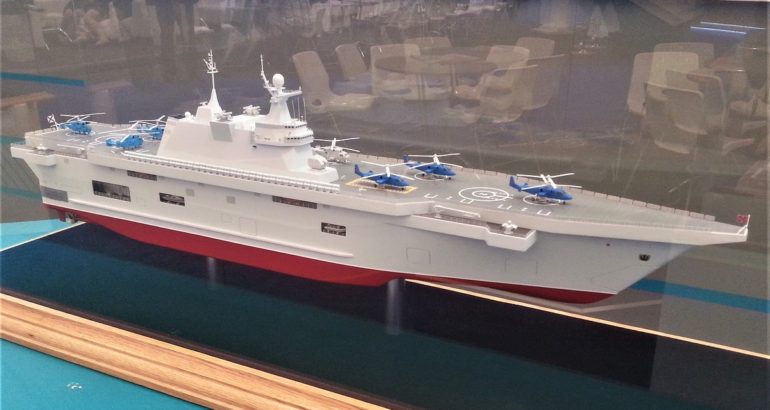 Scale model of the proposed "Priboy" amphibious assault ship at the «ARMY-2015» military-technical forum. Picture by: Artem Tkachenko via Wikipedia

Russian media have recently reported the characteristics of prospective amphibious assault ships which are to be laid in the spring of 2020. They show that Russian Navy will obtain, although with a delay, universal landing ships for ship-to-shore connection. The Profile magazine writes about their characteristics and design.

At present Russia is designing a new family of multirole seaborne helicopters under Minoga codename which are sometimes identified as Ka-65. The exact characteristics of the vehicle are not disclosed, but available data provide for some conclusions.

In particular, prospective seaborne helicopters will have two TV7-117 engines with a takeoff capacity of 3000 HP and boost capacity of 3750 HP. TV7-117 powers multirole Mi-38.

The project to design a seaborne helicopter with such engines began yet in 1991 in Soviet time. The new vehicle Ka-40 had to have a takeoff weight of close to 15 tons. If there is any succession of Ka-40 in Ka-65, the takeoff weight is likely to be the same.

The capacity and takeoff weight show that Minoga corresponds to Mi-38 or multirole AW-101 helicopter.

A helicopter with a takeoff weight of over 20 tons is likely to appear in future and reinforce the airpower. However, 20 Ka-65 are sufficient to land a marine battalion with infantry support weapons (mortars, automatic grenade launchers, large-caliber machineguns, antitank missiles) and light artillery. Armor, automobiles, heavy artillery are to be delivered by landing boats.

The amphibious assault concept in the Russian Navy was formed by the results of two world wars.

The subordination to army interests automatically boiled down the role of the Navy to planning of operations in support of the ground forces. The need to have expeditionary forces capable of limited amphibious assault at a major distance from the bases has not been considered for decades. The issue came to attention in the last years of the Soviet Union when the design of universal landing ships of project 11780 was launched in the framework of the concept which shaped out in the West by the time.

Read part 1 of this article at this link