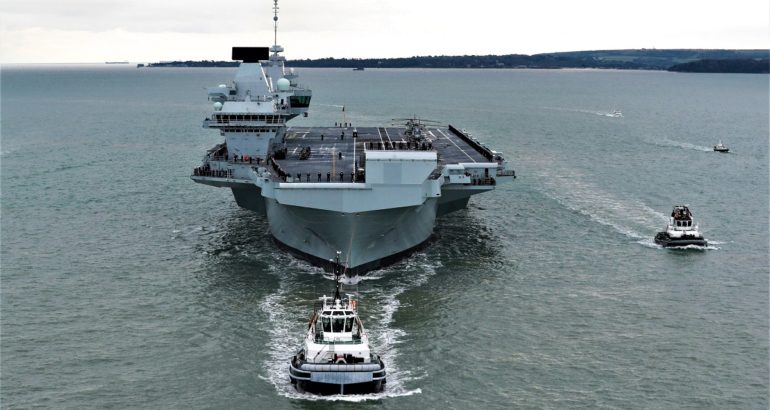 Queen Elizabeth-class aircraft carrier HMS Prince of Wales has been commissioned into the Royal Navy Fleet today. HRH The Duchess of Cornwall, as the ship’s Lady Sponsor, alongside HRH The Prince of Wales, presided over the ceremony at HM Naval Base Portsmouth this morning, to an audience of 2,000 from industry, allies, friends and families.

Commanding Officer, Captain Darren Houston, read the commissioning warrant to the crew and guests gathered in the hangar which will soon house F-35 jets and a variety of helicopters. Among those watching were the First Sea Lord, Admiral Tony Radakin, ambassadors from France and USA, and the commander of the US Sixth Fleet, Vice Admiral Lisa Franchetti.

As we lower the Blue Ensign and raise the White Ensign, this day marks the culmination of over a decade of work by the country’s maritime and ship-building industry who have come together with the Ministry of Defence to deliver this magnificent ship through the Aircraft Carrier Alliance.

About 550 VIP guests, 1,400 family and friends of the ship’s company, including guests with connections to the previous HMS Prince of Wales, a battleship sunk on that same date 78 years earlier by Japanese forces in the South China Sea, joined the crew for the ceremony.

Nearly 7,000 miles away, the crew of HMS Enterprise stopped at the final resting place of HMS Prince of Wales and HMS Repulse last week to hold a memorial service and lower a White Ensign to the remains.

About HMS Prince of Wales

HMS Prince of Wales, which by naval tradition will be referred to in the feminine form despite carrying the title of the male heir apparent, is marginally larger and heavier than her sister. She has a displacement of 65,000 tons, a length of 284 meters and a beam of 73 meters.

The carrier is powered by four diesel engines and two gas turbines, run by the 170-strong marine engineering department. They are part of a core ship’s company of about 700 which can swell to more than double that with the addition of personnel from Naval Air Squadrons and Royal Marines.

She departed Rosyth in September and conducted her first sea trials before making her first entry to Portsmouth harbour in mid-November.

More than 10,000 people across the UK have contributed to the delivery of the ship as part of the Aircraft Carrier Alliance, building on the experience they gained in constructing and operating HMS Queen Elizabeth.

HMS Queen Elizabeth has recently returned from her second deployment to the east coast of North America conducting aviation trials with UK F-35 jets and developing her warfighting capabilities. Both carriers are alongside in Portsmouth for routine maintenance and well-earned Christmas leave for their crews before resuming their programmes to reach operational capability.