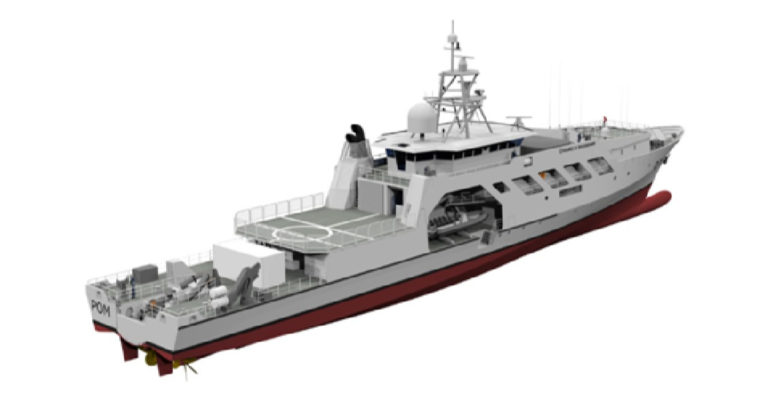 Rendering of the future "POM" OPV of the French Navy

French President Emmanuel Macron announced today a procurement order of 6 new patrol vessels to be based overseas, a program known as POM in French (for patrouilleurs outre-mer).

The offshore patrol vessels (OPV) are set to be delivered to the French Navy (Marine Nationale) between 2022 and 2025.

The new POM vessels will be based in:
– 2 ships in New Caledonia at Nouméa naval base (Pacific fleet). Two POM vessel are set to replace the P400 type patrol vessels La Moqueuse and La Glorieuse.
– 2 ships in La Reunion Island at Port Réunion naval base (Indian Ocean fleet), to replace the patrol vessel “Le Malin” (hull number P701) and a P400 vessel already decommissioned . “Le Malin” was actually a longline fishing boat seized in 2004 by the French Navy following illicit fishing off Kerguelen Islands. From 2007 the boat served as a diver support vessel in Toulon before being finally turned into an OPV in 2011. The vessel then joined the Indian Ocean fleet.
– 1 ship in French Polynesia at Fare Ute Papeete (Tahiti) naval base (Pacific fleet), to replace the Lapérouse-class patrol vessel Arago (hull number P675) and P400 type patrol vessel La Railleuse
– 1 ship to be based at a yet to be determined location

The early requirement called for a ship class with a length of about 70 m, a draft of less than (or equal to) 3.8 m and a maximum speed of at least 22 knots.

The initial requirements also called for a VTOL UAV capability, but a source told Naval News the Airbus / Survey Copter ALIACA fixed wing UAV might be selected. To be confirmed.

In a context of increasing threats to fish resources, biodiversity and international rules of the law of the sea, France intends to fully exercise its sovereignty and responsibilities in France and overseas.

That is why, the recovery of the surveillance of the resources of our overseas maritime spaces have begun with the delivery of the three PLG/PAG vessels between 2017 and 2019.

It is extended today with this order which will make it possible to replace the former generation of patrol boats in New Caledonia, French Polynesia and La Reunion, between 2022 and 2025.

With extensive capabilities – including an aerial drone – these POM vessels will provide missions of sovereignty and protection in the French exclusive economic zones (EEZs), intervention against marine pollution and for the preservation of the environment, as well as search and rescue. Thus, between 2017 and 2025, all the patrol vessels based overseas will have been renewed.