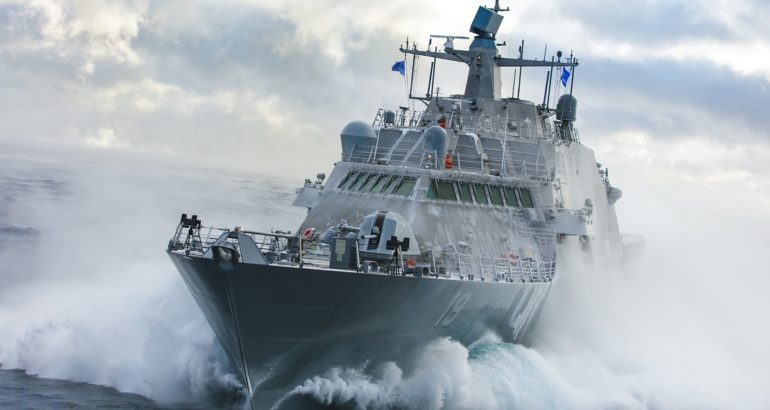 Littoral Combat Ship (LCS) 19, the future USS St. Louis, completed Acceptance Trials in Lake Michigan. Now that trials are complete, the ship will undergo final outfitting and fine-tuning before delivery. LCS 19 is the tenth Freedom-class LCS designed and built by the Lockheed Martin-led industry team and is slated for delivery to the Navy early next year.

“The LCS fleet is growing in numbers and capability, and LCS 19’s completion of acceptance trials means the Navy will shortly have 10 Freedom-variant fast, focused-mission ships in the fleet. As each Freedom-variant hull deploys, we seek out and incorporate fleet feedback and lessons learned to roll in capabilities for new hulls. As a result, LCS 19 includes a solid-state radar, upgraded communications suite, increased self-defense capabilities and topside optimization, among other updates.”

In total, there are more than 500,000 nautical miles under the keel of Freedom-variant LCS. The Freedom-variant LCS has completed three successful deployments with a fourth ongoing. In October, LCS 7 (USS Detroit) deployed to the U.S. Southern Command supporting the Martillo campaign – a multinational effort targeting illicit trafficking routes in Central American coastal waters.

LCS is designed to deliver speed to capability and to grow as the missions it serves evolve. Today, the Freedom-variant LCS delivers advanced capability in anti-submarine, surface and mine countermeasure missions. The Freedom-variant LCS is targeted for warfighting upgrades to enhance situational awareness and evolve the ship’s self-defense capabilities. These upgrades are already underway – LCS computing infrastructures are receiving cyber upgrades and over-the-horizon missiles are being installed in support of upcoming deployments.

“Progress on the Freedom-variant program and LCS 19’s achievement would not be possible without the expertise and effort of our shipbuilders at Fincantieri Marinette Marine, and our strong partnership with Lockheed Martin and the U.S. Navy. We are dedicated to delivering an effective, capable product to our armed forces.”