The vessel conducted its SAT from November 18 to December 9 off the coast of Oaxaca and Guerrero. With the SAT now completed, the vessel if ready to enter “active service” with the the Mexican Navy.

Mexico announced a contract with the Dutch shipbuilding group Damen for the construction of one ship of the SIGMA 10514 frigate design on April 10, 2017.

The official keel laying of the frigate took place on August 17, 2017 at the Damen Schelde Naval Shipbuilding (DSNS) shipyard of the Damen group in Vlissingen (Netherlands). Two hull sections of the ship were made there, and then transfered to Mexico at the ASTIMAR-20 naval shipyard. The Mexican shipyard manufactured the remaining four sections of the hull and assembled and equipped the ship.

Initially, the Mexican Navy planned to have six POLA ships, of which five set to be put into operation by 2024, with construction at the ASTIMAR-20 shipyard. However, during the launch of the first of class ARM Reformador on November 23, 2018, the leaders of the Mexican Navy announced more cautious plans to have eight ships of this project (four each in the Atlantic and Pacific fleets) with their construction spread oover 20 years “depending on the level of funding.” So far, no contracts with Damen for the following ships of this type have been concluded. It should be noted that the Mexican Navy already has long-term experience of successful cooperation with the Damen group, with several Damen Stan Patrol 4207 project (Tenochtitlan class) and auxiliary vessels built.

During the recent SAT, the weapons systems were tested with two F-5 Tiger fighter jets from the Mexican Air Force. They were used to test the target detection of supersonic tracks, as well as detection and monitoring of multiple objectives.

According to the Mexican Navy, the operational capabilities of the POLA-class will contribute to the development of long-range search and rescue operations to safeguard human life at sea, as well as humanitarian relief, multinational and peacekeeping operations, which will be optimized thanks to their characteristics.

Before the Mexican Navy, the Indonesian Navy (TNI AL) selected the SIGMA 10514 design as their main and most modern surface combatant (it is known locally as the PKR Frigate).

The vessel is fitted with a full Thales mission suite that enables the crew to perform their surveillance and security missions. Under a Transfer of Technology agreement, Mexican Navy engineers participated in the engineering, integration and test activities of the mission suite. 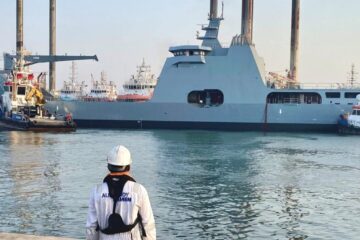 Naval News Staff 16 Nov 2021
The new, 100-metre LST 100 for the Nigerian Navy has been launched at Albwardy Damen, Sharjah, UAE a few months ago.